SEOUL, Jan. 10 (Yonhap) -- South Korea's presidential front-runner Moon Jae-in on Tuesday pledged drastic reform of chaebol to end the corruptive connection between them and political power and fix their unfair domination of the national economy.

In an address to an economic policy forum, the former head of the opposition Democratic Party said he would focus on the nation's four largest family-controlled business groups, namely Samsung, Hyundai Motor, SK and LG.

"If we are to move forward to revive the economy and build a country where the people are well off, we have to cut the collusive links between politics and businesses and eradicate the deep-rooted chaebol irregularities," Moon said.

Calls for keeping business behemoths in check have mounted recently in the wake of an immense corruption scandal involving President Park Geun-hye and her confident Choi Soon-sil. Top chaebol executives are under bribery investigations over allegations they donated huge sums of money to two public foundations controlled by Choi in return for business and policy favors.

To achieve the long-delayed chaebol reform, he emphasized a more realistic approach of targeting only the four largest groups. He noted Samsung affiliates make up a fifth of combined assets of the top 30 chaebol and the Big 4 account for two-thirds.

He also pledged to redress the current biteless fair trade regulations which apply too broadly to be effective in curbing chaebol's excessive market dominance.

"Under the current fair trade law, the largest company, which is Samsung, and the 65th largest company are subject to the same regulations," he said.

"I will reduce the concentration of economic power by focusing those regulations on the 10 largest chaebol." 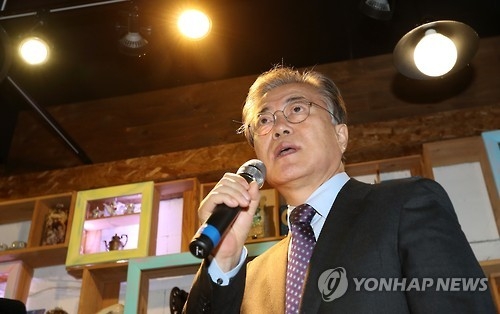 Moon said he will deal with crimes committed by chaebol with a "no-tolerance" principle, rooting out serious anti-market criminals, restricting presidential powers to grant pardons to tycoons, and prohibiting justices from handing down suspended prison terms for their crimes.

Moon also said he will take measures to ensure state-run institutions are not forced by those in power into unfairly exerting shareholder voting rights in favor of chaebol. His aides called the plan the "Lee Jae-yong law," referring to the heir-apparent of Samsung Group.

In July 2015, the National Pension Service approved a controversial merger between two Samsung companies despite criticism from shareholders and activists that Lee was seeking to enhance his group-wide control through unfair share swap rates.

Samsung is alleged to have secured the support from the nation's largest institutional investor in exchange for its donations and favors to Choi Soon-sil and her daughter.

Moon committed to improve chaebol governance structure and restrict industrial capital from engaging in financial businesses, a practice which critics say has been used for chaebol families to dominate affiliates with meager percentage of stake holdings.