SEOUL, Jan. 11 (Yonhap) -- Fierce competition is expected among technology companies from both home and abroad in the field of artificial intelligence (AI) language translations that industry officials say will soon reach human-level accuracy.

Google Inc. is the leading provider of an AI-based translation platform by becoming the first to introduce its Neural Machine Translation (NMT) system last year that significantly improves translation quality and reduces errors.

The new system is based on a deep learning framework that learns from millions of examples from over 100 different languages, the U.S. tech giant said.

Unlike previous machine translation that was adopted 10 years ago, the new system considers an entire sentence as one unit. Previous systems independently translated words and phrases within a sentence.

The multilingual system is based on a deep learning technology that provides computers with the ability to learn without being explicitly programmed.

"The way Google Translate works is that it crawls and indexes content that is already translated by humans," Barak Turovsky, who is responsible for product management for Google Translate, was quoted by a Google official as saying.

The new platform currently translates phrases and sentences from English to eight other languages, including Korean. The company said it plans to apply NMT to other languages in its translation service.

Google's AI can not only understand languages like Korean, but can now translate between two languages it has not even been trained on. 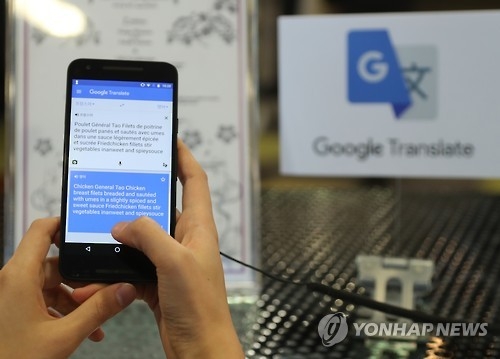 "Google Translate increases accuracy in full sentence translations, and the figure quality is expected to get higher as more data piles up over time," said Lois Kim, a Google Korea official.

The company said the translation between related languages, like from English to Spanish and vice versa, has approached human-level accuracy.

Google said it is making efforts to solve the issue of pronouns to improve accuracy in other language translations and believes that the quality will improve over time due to the machine learning technique.

"The gender issue, for example, or pronouns, are a general problem for machine translation. And it becomes much better with NMT," Turovsky said.

Unlike other AI-assisted translation services, the Google application can translate up to 40 languages via a camera on a smartphone.

The software uses a camera with a system called optical character recognition to identify text in photos and translate the words.

Microsoft Corp., another U.S. tech giant, has also rolled out a translation app that experts say is based on AI technology like speech recognition and machine translation.

Microsoft provides the service for Windows and other operating systems from rivals Apple Inc. and even Google. 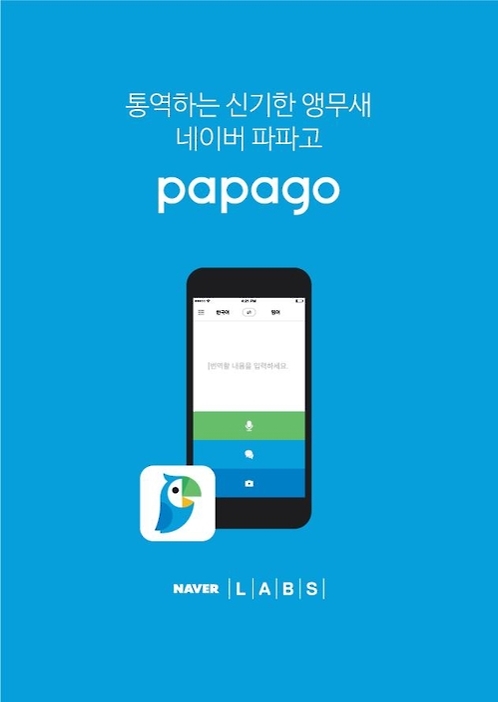 Papago, which can operate with or without an Internet connection, translates text, speech, and even words and phrases from an image using AI software developed by the portal firm.

"The NMT method is a technology that is attracting attention in recent deep learning areas," said Hong Kyung-pho, a Naver official, adding that the context of the words and sentences can be translated more efficiently and accurately.

The company said its NMT-based translation service can be used for the service such as webtoons, as it can even translate colloquial Korean expressions used in everyday life.

The company, which is the industry leader in the local search engine sector, has been making efforts to diversify its business portfolio by expanding investments in the AI sector.

Naver earlier said it will invest 500 billion won (US$425.4 million) over the next five years to help develop technologies in AI and self-driving cars.

The app will be available to athletes during the 2018 PyeongChang Winter Olympic Games, the company said, allowing athletes and sports officials to communicate freely with each other.

The mobile app is compatible with both Apple's iPhones and Samsung Electronics' Android-based mobile devices.

The app can also translate speech, copied letters and even sentences or words from an image by recognizing 270,000 Korean words and 65,000 English words.

In addition, the company said it will roll out "Genie Trans" later this year which is capable of translating entire documents. 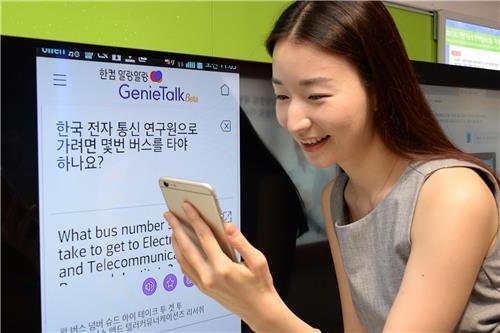