SEOUL, Jan. 10 (Yonhap) -- Members of idol group I.O.I have discussed what they will do after their disbandment at the end of the month with South Korea's largest news agency.

According to a two-minute video clip released by Yonhap News Agency's Tong Tong TV on Sunday, after the group ends its official activities on Jan. 31, some members will continue singing with new or existing idol groups while others will concentrate on their studies or go into acting.

The 11-member act made its debut through cable broadcaster Mnet's hit idol audition entertainment show "Produce 101" in May 2016. From a pool of 101 trainees who battled for the top spots from various entertainment companies, 11 girls emerged victorious. They formed the new group I.O.I, a one-year project group that soared to the top of the K-pop industry with two EPs and one unit single track. 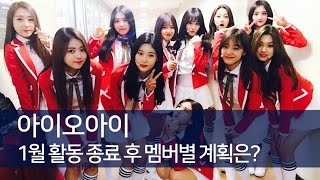