NEW YORK, Jan. 10 (Yonhap) -- Former U.N. Secretary-General Ban Ki-moon will make no departure statement when he leaves New York for South Korea this week, aides said Tuesday, as his homecoming is drawing huge attention due to his presidential ambitions.

Ban, whose 10-year term as U.N. chief expired at the end of last month, is scheduled to take a 1 p.m. flight to Seoul from New York's John F Kennedy International Airport on Wednesday. His return is a focus of attention as he has declared a desire to run for South Korea's president.

Since last week, Ban has been spending time with his family at a mountain resort near New York and plans to head directly to the airport from the resort. Aides said Ban will wave to well-wishers at the airport, but has no plan to make a departure statement.

Upon arrival at Incheon International Airport on Thursday afternoon local time, Ban plans to hold a brief question and answer session with reporters before heading off to his home in southern Seoul.

On Friday, Ban plans to pay his respects at the Seoul National Cemetery before paying a visit to the grave of his late father as well as his 92-year-old mother, living in central South Korea.

Last month, Ban declared his presidential aspirations, saying in a farewell press conference as U.N. chief that he is ready to give his all if it contributes to the development of the country.

Opinion polls have long shown Ban is one of the favorites in this year's presidential election. The election, which was originally scheduled for December, could take place much earlier if the Constitutional Court upholds the impeachment of President Park Geun-hye. 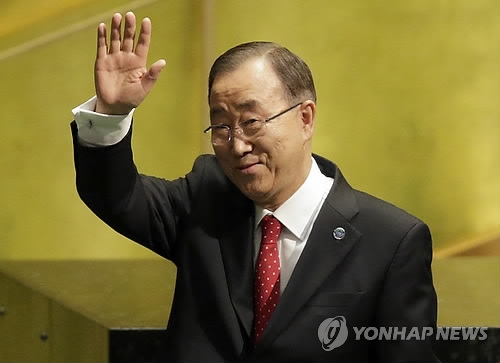 Ban to make no departure statement when leaving for S. Korea

Ban to make no departure statement when leaving for S. Korea