Kim threatened last week that the communist nation reached the final stage of preparations to test-fire an ICBM apparently capable of reaching the continental U.S.

"If he persists, as he said he would the other day, in moving forward on the intercontinental ballistic missile front, it more immediately drags the United States into an immediate threat situation, to which we then may have to find other ways or more forceful ways of having an impact on the choices that he is making," Kerry said during a visit to the U.S. Naval Academy in Annapolis, Maryland. He did not elaborate on what those "forceful ways" could be.

Kerry also said North Korea is the No. 1 challenge for the incoming administration.

"There's a reckless dictator who holds his country effectively in a gulag, in a kind of prison. He's unpredictable, and recklessness and unpredictability for somebody who has their hands on nuclear weapons is a very genuine threat, and particularly as they pursue intercontinental ballistic capacity, which would threaten the United States of America," Kerry said. 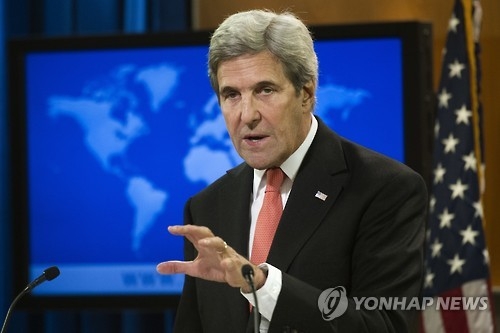 Kerry said the U.S. will never accept the North as a nuclear state.

The outgoing top diplomat also said the next administration should increase pressure on the North.

"We will make it clear to the incoming administration that there are diplomatic ways of increasing the pressure, which we've been ratcheting up," he said.

Cooperation with China is critical in resolving the North Korea problem, he said.

"China provides 100 percent of the fuel that goes to North Korea -- every airplane, every truck, every car that moves in North Korea gets its fuel from China," he said. "China also is the facilitator, through Beijing, for the banking system and for whatever movement of commerce there is, of money, etc., for the North Koreans."

"My counsel to the next administration will be to work with China very, very closely and try to get the Chinese to, in fact, have a greater impact on the North in order to affect their behavior," he said.