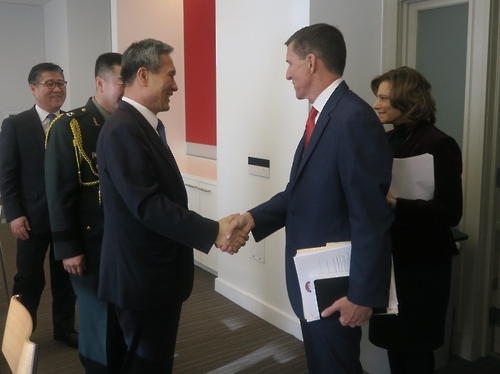 Sticky rice cake is often used as a metaphor for an inseparable bond in Korean culture.

Flynn made the remark when he met with his South Korean counterpart Kim Kwan-jin Monday for talks that focused on ways to move relations between the two countries forward and how to deal with North Korea, Kim said.

The two sides also agreed that the North's nuclear program can never be tolerated, pledging to work together to change North Korea's calculus through effective sanctions and pressure so as to get the regime to move toward denuclearization, Kim said.

Flynn also called in particular for the thorough implementation of sanctions, saying any act of evading sanctions should never be tolerated, Kim said. The two sides agreed to work closely together to get China to vigorously enforce sanctions, he said.

"National Security Advisor-designate Flynn expressed a strong willingness to strengthen the Korea-U.S. alliance, comparing the alliance to a sticky rice cake," Kim said at a briefing to South Korean correspondents.

It is the latest in a series of remarks that Flynn has made to dispel concerns about the fate of the alliance and underscore the point that the incoming administration of Donald Trump will do everything to move relations with South Korea forward.

Trump's election had raised questions about the fate of the alliance, as he has expressed deeply negative views of U.S. security commitments overseas, as well as a willingness to withdraw 28,500 American troops from the South unless Seoul pays more for them.

Since his election, however, Trump has shown signs of retreat from his campaign rhetoric, making remarks reaffirming the alliance with South Korea and filling some key posts with Flynn and other people valuing the alliance.

The sides also reaffirmed their plan to deploy the THAAD missile defense system in the South, Kim said.

"THAAD is a purely defensive weapon. Its deployment is part of our self-defense measures," Kim said. "As this is an issue pertaining to our sovereignty, we won't care even if China opposes it. The two countries reached consensus on making sure to deploy it as agreed and we will go as planned."

Seoul and Washington decided in July to deploy a THAAD battery to defend against North Korean missiles.

China has strongly called for scrapping the decision, seeing the system, especially its powerful "X-band" radar, as a threat to its nuclear deterrent and other security interests, despite repeated assurances from Washington that the system is designed only to defend against the North.