During a press conference held in line with a New Year policy briefing to Acting President and Prime Minister Hwan Kyo-ahn, the minister said he expects China to resolve the issue "in accordance with the country's status and dignity."

"During the talks for the two countries' fisheries agreement, China presented opinions close to what we expected regarding the illegal fishing issue," Minister Park said. "We are looking forward to seeing China's (implementation of the) changed stance."

During their annual talks on the fishing quota in December, South Korea and China agreed that any boat carrying unnecessary equipment such as pikes or spears that can be used as weapons in order to resist inspection will be immediately penalized.

The agreement came after a South Korean Coast Guard patrol boat sank while pursuing a Chinese boat that was fishing illegally in South Korean waters in October.

South Korea handed over the relevant information to China but its investigation has made no major progress so far.

"Whether China promptly confirms the identity of the problematic boat and takes legal steps is a matter of the country's dignity," Minister Park said. "I am sure that it will arrest the boat and take legal steps, and if not, the Chinese government should be held responsible." 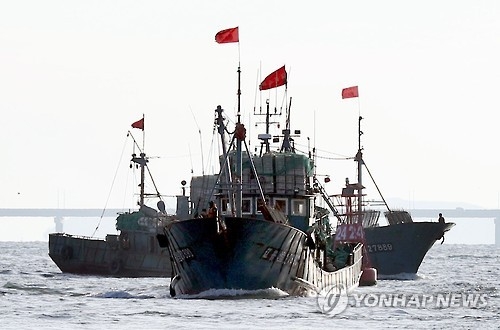 South Korea urges China to crack down on illegal fishing

South Korea urges China to crack down on illegal fishing