SEOUL, Jan. 11 (Yonhap) -- In a managerial career spanning more than three decades, Kim Sung-keun, skipper for the Hanwha Eagles in the Korea Baseball Organization (KBO), has pretty much seen it all and done it all.

But the 74-year-old thinks the 2017 season will be "the most pressure-packed" one to date. After all, he's entering the final year of his three-year contract with a club that hasn't been to the postseason since 2007.

After finishing dead last for the third straight season in 2014, the Eagles brought in Kim to help right the ship and change the losing culture that had permeated the once-proud franchise.

On Kim's watch, the Eagles finished sixth in 2015 and seventh last year -- better than the pre-Kim years but still not good enough for postseason, open to the top-five teams in the 10-club league.

With the pressure to deliver a playoff berth mounting, Kim said Wednesday he is constantly worried about how to make the most of what he has with the club.

"This will be the most pressure-packed season of my life," said Kim, who'd previously won three Korean Series championships with the SK Wyverns: 2007, 2008 and 2010. "I'll do the best I can for the loyal fans of this ball club." 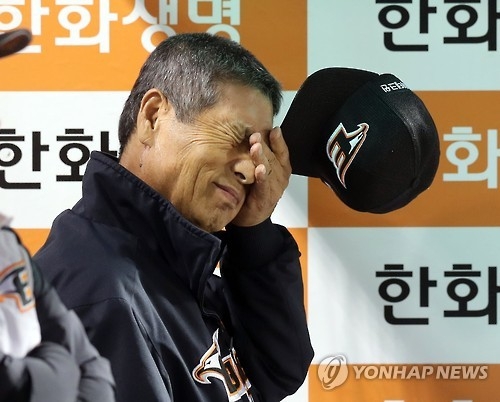 Their losses often as spectacular and entertaining in their own strange ways as their victories, the Eagles have been among the KBO's most popular clubs and a major road attraction over the past two seasons.

And to give the fans more to cheer about, Kim said the healthy returns of injured players will be crucial.

Two workhorses in the bullpen -- Kwon Hyuk and Song Chang-sik -- are both recovering from elbow surgeries. Right-handed starter An Young-myung is rehabbing from a right shoulder operation.

All three are in their 30s, and whether they can come back 100 percent is a question mark.

"We just have to take care of those injured players," the manager said. "And the key during our spring training is to try to develop new pitchers who can fill in for the injured ones."

Kim, who has long faced criticism for his excessive and irregular use of relievers, said he wants to devise a special program to help prevent injuries during the season.

Kim has also developed a reputation for running his players into the ground in spring training, but he vowed to cut the amount of training in half this year.

The Eagles have perhaps the highest-profile foreign contingent in the KBO this year. They've retained former big league catcher Wilin Rosario for his second season at US$1.5 million. Then on Tuesday, the Eagles signed ex-major league All-Star pitcher Alexi Ogando for $1.8 million.

They are still looking to add another foreign pitcher. In 2016, the Eagles didn't have much luck with their foreign arms, some of whom had major league credentials. They opened the season with Esmil Rogers and Alex Maestri, but they combined for just four wins in 15 games. Their replacements, Fabio Castillo and Eric Surkamp, were just as bad, winning nine games together in 37 combined appearances.

Kim said he hadn't even seen any video of Ogando but said he was happy with the acquisition of the right-hander with a career major league ERA of 3.47, with 33 wins in 283 appearances.

"He has strong credentials, and I hope he lives up to expectations," the manager said. "I'd like to thank the front office for this signing. I expect them to make another good choice (with a second foreign pitcher)."

Once the Eagles' de facto general manager, Kim used to make the final call on all player-related decisions, including foreign player signings. But the Eagles recently hired a new GM in Park Jong-hoon, a rare breed in the KBO front office who has both playing and managing experience in the league, and in turn stripped Kim of most of his authority outside the dugout.

This is the reason why Kim hadn't seen Ogando pitch -- the front office handled all the work -- but he said this change won't affect him.

"My role is to maximize our club's strengths in the circumstances that we're in," he added. "I have to stick to my responsibilities (as the manager)."