SEOUL, Jan 11 (Yonhap) -- Thousands of subcontractor workers at Daewoo Shipbuilding & Marine Engineering Co., a major shipyard in South Korea, are on the brink of losing their jobs as the shipbuilder has failed to clinch new deals for offshore facilities, industry sources said Wednesday.

According to the sources, Daewoo Shipbuilding has 11 offshore plants, six of which are scheduled to be delivered this year.

Usually, up to 2,000 workers are mobilized to work on an offshore plant per day, and a total of 5,400 workers, most of whom come from subcontracting firms, are currently dedicated for the shipbuilder's offshore facility projects, the sources said.

The problem is that some workers may be let go as the shipyard has bagged few offshore facility deals for the past two years.

In a desperate bid to keep above water, local shipbuilders have been pushing for job cuts and other cost-saving measures. Daewoo Shipbuilding had sought to cut its staff by some 20 percent to 10,000 by the end of last year but failed to carry out the measure. 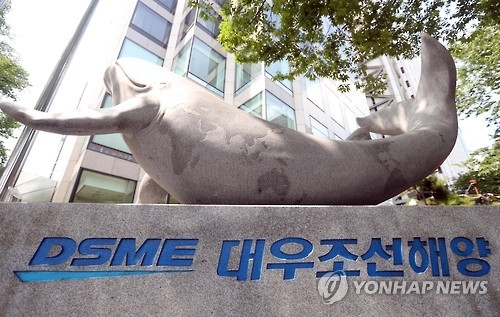