In 2016, the two South Korean automakers sold a combined total of 61,727 cars in the European country, up 16.2 percent from the previous year, according to the report from the France office of the country's state-run Korea Trade-Investment Promotion Agency (KOTRA).

The tally marks the second highest figure and is just 24 units short of the record 61,751 units set in 2012, it added. The 16.2 percent increase also greatly outpaced a 5.1-percent expansion in France's overall auto sales.

Their combined market share also climbed to 3.1 percent, breaching the 3-percent mark for the first time since 2013.

The sharp rise in sales was partly attributed to brisk sales of SUVs.

Sales of the Hyundai Tucson compact SUV more than doubled from a year earlier, spiking 150.3 percent to 13,006 units last year, while sales of the Kia Sportage SUV surged 26.1 percent on-year to 9,951 cars, according to the report. 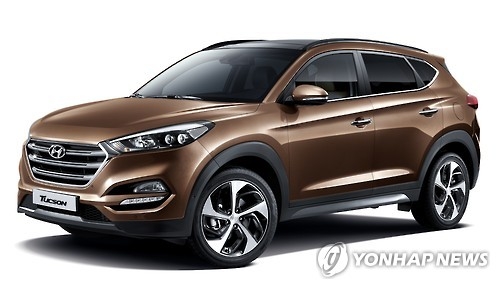