SEOUL, Jan. 11 (Yonhap) -- A newly established splinter political group that broke away from the Saenuri Party said Wednesday that the ruling camp needs to be dismantled since the president was impeached over the high-profile influence-peddling scandal.

"The interim head In Myung-jin should step down together with key loyalists of President Park Geun-hye, with Saenuri being dismantled in the near future to win back the support of the people," said Rep. Joo Ho-young, the floor leader of the new political entity set up by former Saenuri lawmakers.

The group was earlier tentatively named the New Conservative Party for Reform, but it later finalized its Korean name as the Barun Party. It has not yet officially decided on its English name, as the group has been facing difficulties in finding suitable vocabulary that can deliver its political identity. Barun can be translated as righteous or upright.

Joo also claimed at least 15 members in Saenuri are responsible for the unprecedented scandal that led to the impeachment of Park, claiming In's plan to purge only two or three lawmakers indicates the party lacks sincerity in seeking reform.

The whip said the new party is a "life boat" for the sinking conservative bloc, adding the ruling party's leadership is only holding up much needed efforts to delay conservatism.

Saenuri has suffered internal feuds as In pushed to purge Park loyalists for the normalization of the party hit hard by the president's impeachment on Dec. 9. Rep. Suh Chung-won of Saenuri on Monday sued its interim head, claiming he violated the law on political parties by coercing some Saenuri members to leave the party. 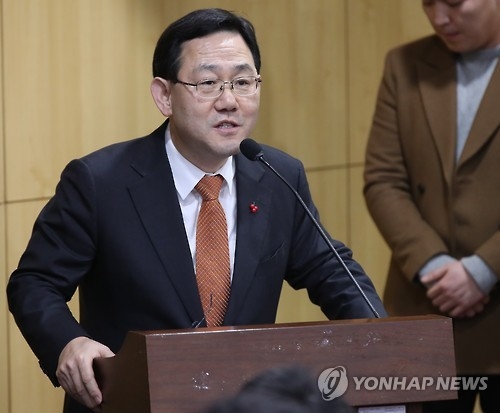