In a meeting with Goldman Sachs CEO Lloyd Blankfein in New York on Tuesday (U.S. time), Finance Minister Yoo Il-ho stressed Asia's fourth-largest economy has been running steadily and smoothly despite the impeachment of President Park Geun-hye in December, according to the finance ministry.

He said the 2017 budget bill was approved by the parliament in early December as scheduled, while the government also announced its policy plan for 2017 before the end of last year.

Schwarzman was recently named the chairman of the Strategic and Policy Forum, an advisory group on economic policies for the Trump administration.

South Korea's top economic policymaker is on a five-day trip to the United States to meet with U.S. investors and media as part of efforts to attract more foreign investors despite intensifying worries over Asia's fourth-largest economy.

"The meetings also helped us get a glimpse of the strategies and policies of the incoming U.S. government," Yoo said. "We will make constant efforts to have U.S. government officials and investors understand South Korea's economic situations." 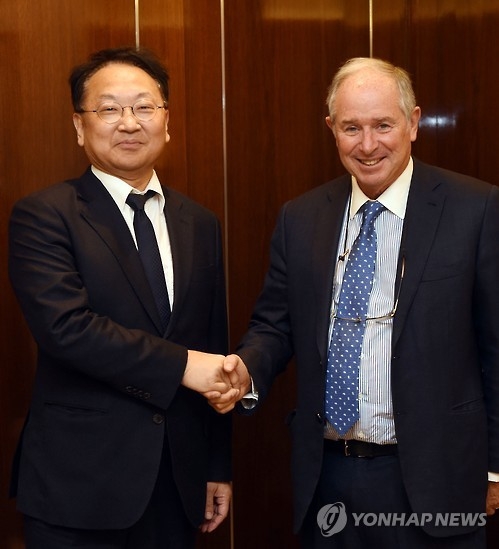