The fund will be created by the private sector, with the government's investment accounting for 10 percent of the capital, Kim said. 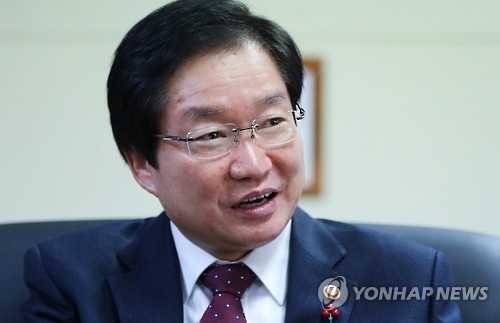 Discussions among relevant ministries, including the Ministry of Strategy and Finance and the Financial Supervisory Commission, will soon begin, Kim added.

"According to experts, the number of cruise passengers could be more than 100,000 people if a cruise ship of between 50,000 tons and 70,000 tons is placed in service," Kim said in an interview with Yonhap News Agency.

Kim said the government will step up public relations activities to increase the number of cruise passengers.

The number of cruise passengers visiting South Korea was expected to top 2.2 million last year, doubling from 2015, driven by an influx of Chinese travelers via cruise packages, according to the Korea Tourism Organization. Since 2010, the number of cruise travelers to South Korea has increased at an annual rate of 47 percent, with the figure topping 1 million in 2015 for the first time.

South Korea's shipping industry has been undergoing a painful overhaul since Hanjin Shipping Co., the country's No. 1 shipping line, was placed under court receivership in September last year due to multi-billion-dollar debt

SM Group, a mid-sized business conglomerate that owns the nation's No. 2 bulk carrier Korea Line Corp., plans to launch a new shipping line in March after acquiring Hanjin's major assets. Kim said the government will offer a range of financial support for SM to smoothly launch the new shipping line.

In order to support the seafood industry, the government will develop technologies this year to help fish farms raise yellowtail, big octopus and filefish, Kim said.

S. Korea to set up fund to promote cruise industry

S. Korea to set up fund to promote cruise industry