SEOUL, Jan. 11 (Yonhap) -- Acting President and Prime Minister Hwang Kyo-ahn on Wednesday called for continued efforts to enhance public safety and the rule of law at a time of national crisis in the wake of the impeachment of the president.

During the New Year's policy briefing from seven government ministries and agencies, including the justice ministry, Hwang also stressed the need to stamp out "structural and chronic" corruption, voicing hopes that a new anti-graft law, effectuated last year, would be well enforced.

"To establish the rule of law and public safety is not only the most fundamental factor in protecting citizens' lives and property, but also helps revitalize the economy by facilitating economic transactions and foreign investment," he said. 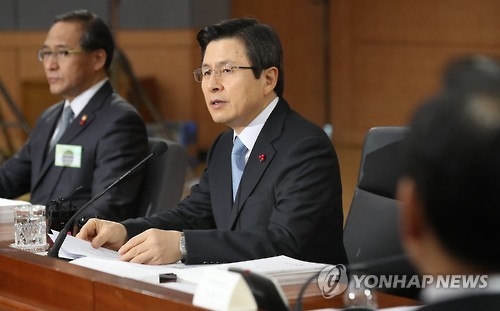 He was apparently referring to those, including North Korea sympathizers, who have been criticized for sowing division among South Koreans and undermining democratic values and institutions in the ideologically divided country.

Touching on anti-government protests, Hwang instructed officials to ensure the "maximum" freedom of assembly, but stick to the principle of sternly dealing with any illegal, violent rallies.

Over more than two months, hundreds of thousands of South Koreans have staged peaceful rallies every weekend across the country, calling for President Park Geun-hye to immediately step down over a corruption scandal.

"It is very important to make sure that the rule of law and common sense -- rather than the logic of force or (selfish) interests -- take firm root in our society," Hwang said.

On the issue of growing terror threats, Hwang ordered a meticulous review of the country's response system to ward off any attacks.

Hwang, in addition, directed officials to strive harder to strengthen the country's capacity to deal with natural disasters, including earthquakes and their possible impact on nuclear reactors.