SEOUL, Jan. 11 (Yonhap) -- The local office of Britain's luxury brand Burberry recently marked down the price of some of its products to reflect the fallen value of the British pound, but only by a small margin compared with the currency's depreciation, fashion industry officials said Wednesday.

Burberry Korea dropped the local price by an average 9 percent as the pound fell after Britain's decision to leave the European Union in June last year. Industry officials say the markdown, however, falls far short of the 17 percent fall of the British currency against the U.S. dollar. The pound's exchange rate against the South Korean won dropped 17 percent from 1,765.90 won in February last year to 1,468.13 won as of Monday.

The price adjustment in Korea also falls behind Burberry's decision for Hong Kong, where the fashion brand's product prices were taken down 10-15 percent in September. Some of the products were down by 20 percent. The markdown rate was more than the 9.75 percent fall of the pound against the Hong Kong dollar at the time.

Burberry Korea declined to talk on the matter despite repeated calls by Yonhap.

Consumer groups have long complained that foreign brands often take advantage of their popularity in South Korea to push demands they do not make in other countries or exclude South Korea from their market action.

Swedish furniture maker IKEA caused ire last year when it kept selling dressers in South Korea that were recalled in the United States and Canada after reported accidents involving children that resulted in deaths. The company had argued that the dressers meet local safety regulations. Volkswagen, who already settled on compensation to its consumers in the U.S. from faked emissions tests, has yet to carry out full recalls or offer compensation steps in South Korea.

U.S. credit card company VISA in May came under fire for deciding to raise the processing fee by 10 percent for overseas transactions, effective in South Korea but not in Japan or China.

"In case of popular brands, they often insist on excessive requirements, such as the cost of interior decorations when deciding to open their store," an official at a Seoul duty-free shop said. "The retailers have to be compliant because of the brand power and because they have to attract customers, and they end up having to accommodate the demands." 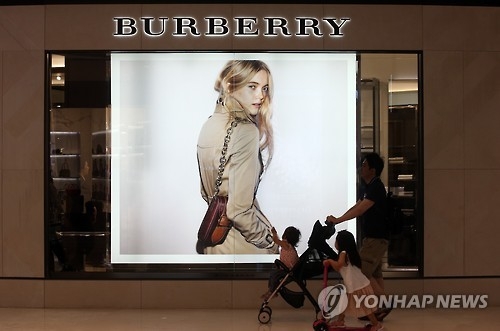 Burberry Korea's price markdown seen as too small, too late

Burberry Korea's price markdown seen as too small, too late