"I was attracted to the role because the character resembles me a lot. I tried to be myself while acting -- bright and cheerful," the actress said Tuesday at a fan meeting held at CGV-Wangsimni theater in Seoul.

The movie features top-billed stars Hyun Bin and Yoo Hae-jin. The plot is centers on a joint secret investigation conducted by the two Koreas.

Hyun Bin, who stars as a North Korean special agent, together with his Southern counterpart Yoo, hunts down an illegal North Korean organization hiding in the South. Yoona takes on the role of Yoo's sister-in-law and the love interest of Hyun Bin's character.

The film is directed by Kim Sung-hoon, who was behind the movies "A Wonderful Moment" (2013). 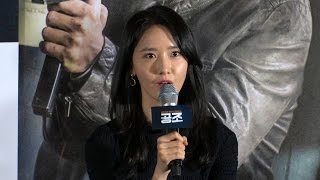