SEOUL, Jan. 11 (Yonhap) -- Former U.N. Secretary-General Ban Ki-moon, a potential presidential contender, will first repudiate bribery allegations against him upon arriving home this week, his spokesman said Wednesday, an apparent move to eliminate an unexpected liability ahead of a key election this year.

Dismissing the allegations as being "utterly untrue," Lee Do-woon said that Ban will explain his position during his planned meeting with the press at the Incheon International Airport, west of Seoul, upon his arrival Thursday afternoon.

Ban, a former foreign minister, completed his second five-year term as the U.N. helmsman at the end of last year. Following his return home, he is widely expected to launch political activities to boost his presidential prospects.

"(The allegations) are utterly untrue, and (we) will hold the media (that raised the allegations) strictly responsible for the (wrong) reports," Lee told reporters during his first press meeting in Ban's office in western Seoul. 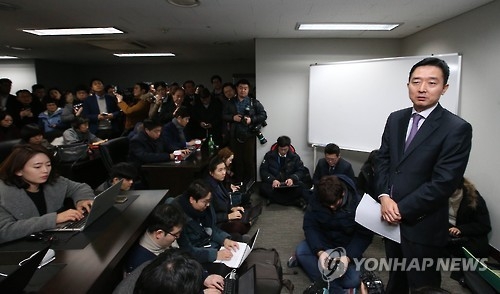 "We will see what the outcome will be at the press arbitration panel, and based on it, we will take additional legal action," he added.

Last week, Ban's side filed a complaint against the Seoul-based weekly magazine Sisa Journal with the Press Arbitration Commission. Officials representing Ban claimed the report made by the magazine was ill-founded.

The magazine recently raised the allegations that Ban received around US$230,000 from Park Yeon-cha, a local businessman, while serving as South Korea's foreign minister in the 2000s. It cited multiple anonymous sources.

During his press meeting on Thursday, Ban will also deliver a message for national harmony and integration, and explain the activities he has engaged in as the head of the international organization over the past decade.

Touching on the government's proposal to provide premier-level security for Ban, the spokesman said that his team has asked the government to scale back protection to a "minimal, adequate level."

Asked if Ban has any plan to create a new party, Lee said that for the time being, he would focus on communicating with ordinary citizens.

"It is not yet the time to consider how he should move forward politically," Lee said. "Until the Lunar New Year's holiday (which begins on Jan. 27), he will focus on activities to reach out to citizens rather -- than engaging in political activities -- to listen to their opinions, and based on this, he will decide on how to move forward."

Commenting on the reports that Ban's brother and his nephew were recently indicted on bribery charges in New York, Lee said that Ban might have been "extremely" surprised, and that Ban has not been aware of the charges.

The former U.N. chief canceled his plan to use the subway to return to his residence in Seoul from the airport on Thursday. He initially sought to use public transportation to connect with citizens and underscore his folksy demeanor.

On Friday, Ban is to pay respects at the tombs of former Presidents Syngman Rhee, Park Chung-hee, Kim Young-sam and Kim Dae-jung in the Seoul National Cemetery in southern Seoul. 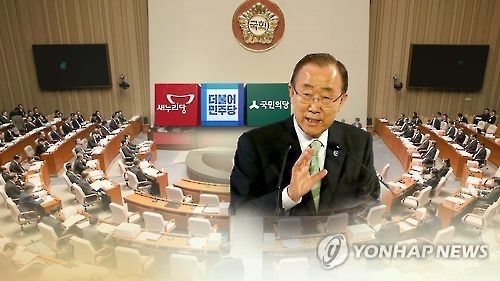