The left-hander has been selected for the country's 28-man roster for the March tournament. But after making some roster changes last Wednesday, manager Kim In-sik said he was concerned about Yang's shoulder issues.

Attending the national team's preliminary meeting at a Seoul hotel, Yang, an ace for the Kia Tigers in the Korea Baseball Organization (KBO), told reporters he has "absolutely no problem" with his shoulder. 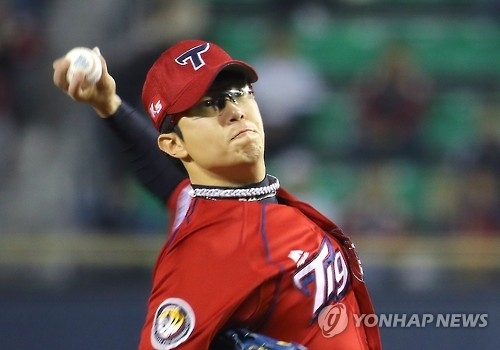 "I think there was some misunderstanding, and it's all been cleared up," he said. "I told the manager that I'll pitch for the country no matter what."

Yang said he'd told his Tigers trainer that he was "rehabbing" after the season, leading the national team coaches to believe he was hurt when Yang actually meant he was simply getting himself back into game shape for spring training.

Yang tossed a career-high 200 1/3 innings in 2016, which tied him for second in the league. He was 10-12 with a 3.68 ERA, his third consecutive season in which he reached double digits in wins. Also, his innings total has increased in each of the past five seasons.

Despite the increasing workload, Yang said, "I am feeling pretty much the same as any other year."

Yang said he normally starts his throwing program in mid-February, but he's already begun throwing this year to be ready for the WBC. South Korea, which will host the first round games, will play its first game in Seoul on March 6.

South Korea needs all the pitching it can get, with one pitcher after another having fallen by the wayside with injuries.

When told the national team will be weaker on paper than previous editions, Yang said, "We'll still have the best players in the country competing at the tournament. We'll all do the best we can."

South Korea will face Israel, the Netherlands and Chinese Taipei in the first round. It reached the semifinals at the inaugural event in 2006 and finished runner-up in 2009, before getting knocked out of the first round in 2013.