Johannes Thammer, who has led Audi Volkswagen Korea (AVK) since late 2012, was charged with violating the Clean Air Conservation Act to win sales approval from the local authorities, according to the Seoul Central District Prosecutors' Office.

His predecessor Trevor Hill, currently working at the German headquarters, and Park Dong-hoon, who headed AVK's Volkswagen division from 2005 to 2013 and is the current CEO of Renault Samsung Motors Co., also faces similar charges.

Prosecutors here suspect that the defendants imported a total of 46,317 vehicles of 15 models from July 2011 to August 2013 by using the so-called defeat device to manipulate the emissions results.

The automaker is also accused of importing cars that did not meet the local standards or fabricating reports to get approval from the local government. Prosecutors said such irregularities took place from as early as August 2010 to March 2016.

Including the three senior executives, prosecutors have indicted a total of seven former and current employees at the carmaker.

One of them -- executive in charge of the vehicle certification process, identified only by his surname Yoon -- was first indicted in July and received a year and a half jail term by a local court on Friday.

AVK and an agent who took part in the company's certification process will also stand trial over the allegations.

The country's environment minister filed a petition with the prosecution in January last year, seeking an official investigation into the carmaker after the emissions scandal broke out in the Unites States in September 2015. In August, the government nullified the certifications of 80 models of the German carmaker suspected of obtaining approval from the local authorities with faked reports.

"Audi Volkswagen Korea has fully cooperated with the prosecutors' office and will participate in good faith in the upcoming court proceedings," the company's spokeswoman said. "Since the present matter is pending litigation, please understand that it would not be appropriate for us to comment at this time." 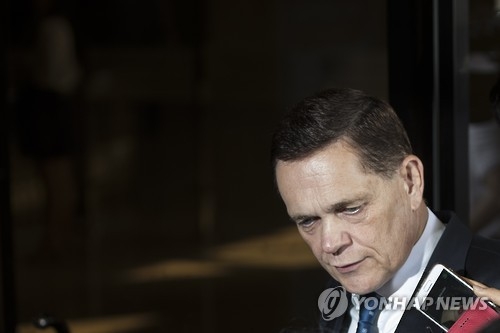