The size of the local market for cloud computing reached 1.19 trillion won (US$996 million) last year, expanding from 766.4 billion won posted a year earlier, the Ministry of Science, ICT, and Future Planning said. 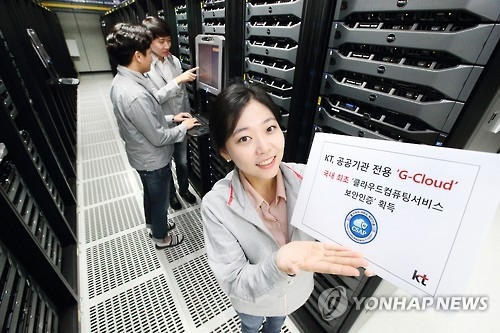 Cloud computing is an Internet-based computing service that rents data storage and computing power to individual users or corporate customers. It allows users to save and process their data using a remote server, instead of using their local server or personal computers.

The ministry attributed the jump to the government's three-year plan to nurture the industry by utilizing cloud computing technology in various industrial areas from agriculture to shipbuilding.

Also, the government has begun adopting cloud computing in the public sector over the 2016-2018 period to save 370 billion won.

The plans are in line with what the government calls "Government 3.0" policies, which aim to open information to the public and adopt the latest technologies to provide customized welfare services. The ministry forecasts the local market for cloud computing to jump to 2 trillion won by 2018.

"The government will prepare the base so that South Korea can lead the global market of cloud computing by 2021," said Lee Sang-hak, an ICT ministry official.

The ministry said it will expand cloud computing systems in schools, state-run R&D centers and other various government institutions this year.