SEOUL, Jan. 11 (Yonhap) -- WJSN, one of the most stand-out K-pop rookies in 2016, has revealed a clip showcasing the choreography of its new single "I Wish" on YouTube.

The brief video, released Monday, features members of WJSN rehearsing the dance for the song, all resplendent in tartan school uniforms, becoming one of the currently most-viewed and most talked about videos online.

Armed with the group's signature soda-pop image through which its look-on-the-bright-side disposition runs, the clip gains enthusiastic reviews from both local and foreign fans who have been writhing with impatience for WJSN to return, saying, "The new song's simply the jackpot!" "I'd call it a classic," "I love the choreography accentuating the synchronized moves of the members" and so on.

"I Wish," the opening cut of the group's third EP “From," debuted to generally positive responses, leaving listeners riveted from the modern sound of the synthesizer and rhythmic guitar riffs streaming throughout the song.

This triumphant climate for WJSN's return was already forecast by many as its members' musical potential had been demonstrated with former singles, such as ""Mo Mo Mo," and member Cheng-xiao swiftly rose to stardom following her TV appearances, which culminated during the Chuseok holiday last year, becoming the spokesmodel for numerous products, which greatly helped boost the group's popularity.

Meanwhile, "I Wish" refers to a naive young girl who can't help falling in love, which came as a form of serendipity despite the uncertainty about its result. The heartfelt confession of innocent love is palpably delivered by the 13 ingenues. 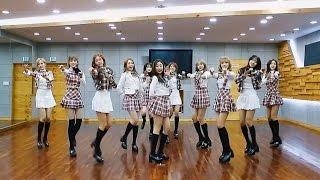