SEOUL, Jan. 11 (Yonhap) -- South Korea's economy is facing an "unprecedented crisis" that may be the country's own fault, the head of a leading economic organization here said Wednesday.

Bahk Byong-won, chairman of the Korea Employers Federation (KEF), said such a crisis may have been partly caused by what he called self-restraining regulations.

"Before, nothing was impossible in South Korea. But now, South Korea has become a country where nothing is possible," the KEF chief said while meeting with reporters in Seoul.

Bahk pointed to the failed attempt by Korean Air Lines Co. to build a new hotel in downtown Seoul as an example.

The country's largest flag carrier earlier sought to build a new hotel on a piece of land it owns in downtown Seoul, but the plan has been ditched due to regulations that prohibit the construction of hotels when there is a school nearby. 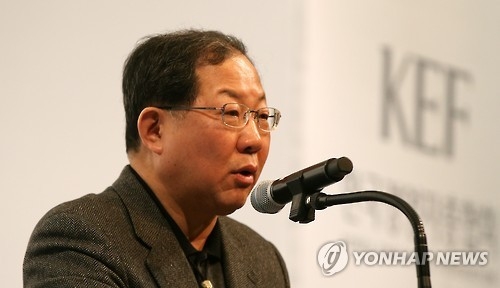 Bahk drew public attention after he was found to have criticized what now appears to have been an inappropriate, if not illegal, solicitation of donations from local conglomerates by the Federation of Korean Industries (FKI) for two sports foundations meant to be controlled by a close friend of South Korean President Park Geun-hye.

The fundraising by the FKI later spiraled into a corruption scandal that eventually led to the impeachment of President Park and the arrest of her friend Choi Soon-sil.

Bahk, despite his earlier criticism, refused to comment on the issue.

Still, the KEF chief insisted a move to reform the structure or internal customs of chaebols, partly to disable them from making illegal donations, must not affect what he called a great majority of other large conglomerates that are not family-owned and thus are transparent.