During the conversations, Hwang focused on ways to expand business cooperation, particularly in the infrastructure development, as he strove to forestall any policy vacuum in the wake of the impeachment of President Park Geun-hye over a corruption scandal last month.

In talks with Kuwait's Emir Sabah Al-Ahmad Al-Jaber Al-Sabah on Tuesday, Hwang called for the Middle East country's support for cooperation in such areas as energy, construction and infrastructure development, and appreciated Kuwait's contribution to the ongoing efforts to denuclearize North Korea.

The emir voiced his hope for more South Korean businesses making inroads into his country and expressed his intention to support the two countries' ongoing joint construction and infrastructure projects.

Currently, 14 South Korean firms engage in construction projects in Kuwait, which are altogether estimated at US$29.9 billion.

The acting president also pledged "maximum support" for the ongoing nuclear reactor construction project under a contract signed in 2009. The around $20 billion scheme aims to build four reactors with a combined capacity of 5,600 megawatts.

The crown prince cast the construction of the reactors as a "top priority" project, saying his country will actively cooperate with the project.

On Wednesday, Hwang had a telephone dialogue with Vietnam's Prime Minister Nguyen Xuan Phuc, expressing his expectation for "mutually beneficial" cooperation in a set of infrastructure development schemes.

South Korean enterprises engage in a series of construction deals with their Vietnamese counterparts, such as a high-speed railway project worth $7.1 billion.

The Vietnamese leader expressed hopes that the two countries can continue to strengthen their strategic partnership, and that South Korean firms can expand their presence in the Southeast Asian market. 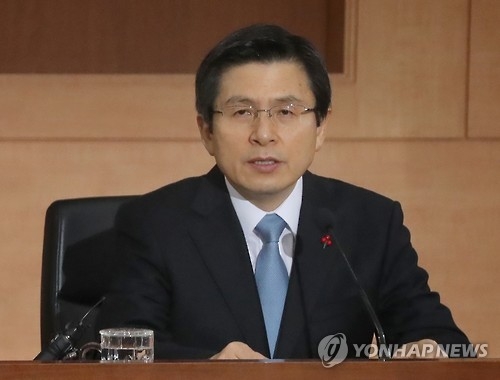