(ATTN: UPDATES throughout with more quotes, background)
By Chang Jae-soon

It was the first time Tillerson has publicly mentioned North Korea since his nomination last month. Tillerson said that "adversaries like Iran and North Korea pose grave threats to the world" but that China "has not been a reliable partner in using its full influence to curb" the North.

Asked if he is willing to impose "secondary sanctions" on Chinese firms doing business with the North, Tillerson said, "If China is not going to comply with those U.N. sanctions, then it's appropriate for the United States to consider actions to compel them to comply." 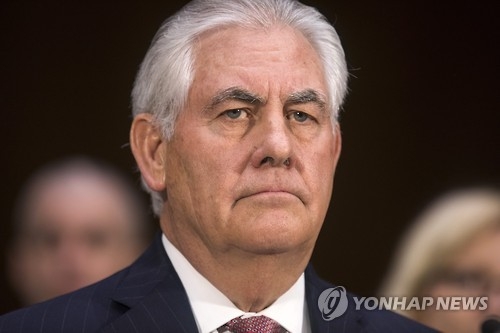 Tillerson blamed the insufficient enforcement of sanctions as a main problem in dealing with the North.

"I think a lot of our troubles today are that we do not enforce. We make commitment. We say we are going to do something and then we don't enforce it. And that is again a mixed message that I think has been sent in the case of North Korea and our expectations of China," Tillerson said.

"I think we have to be clear-eyed as to how far China will go, and not get overly optimistic as to how far they'll go. That's why ultimately it's going to require a new approach with China in order for China to understand our expectations of them, going beyond certainly what they have in the past, which has fallen short," he said.

Tillerson also pointed out that 90 percent of the North's trade with China.

"To the extent that there are specific violations of the sanctions, such as the purchase of coal, which is specifically mentioned in the U.N. sanctions most recently, if there are gaps of enforcement, they have to be enforced," he said.

Trump has also expressed deeply negative views of China, repeatedly criticizing it for not using its influence over North Korea to rein in the recalcitrant neighbor while taking "out massive amounts of money & wealth from the U.S. in totally one-sided trade."

He even raised questions why the U.S. should stick to the "one-China" policy of diplomatically recognizing only Beijing, not Taiwan, when China is uncooperative over the North and engages in unfair trade practices.

"China's island-building in the South China Sea is an illegal taking of disputed areas without regard for international norms. China's economic and trade practices have not always followed its commitments to global agreements," he said. "It steals our intellectual property, and is aggressive and expansionist in the digital realm."

Tillerson also stressed the importance of cooperation with South Korea and Japan in dealing with the North.

"It starts with our friends and allies that is South Korea and Japan ensuring we are completely aligned on our commitment to enforce these sanctions," he said.

Asked if he expects the Trump administration to strengthen relations with South Korea, Tillerson said, "That is to be my expectation, yes, sir."

Tillerson said, however, the U.S. should "hold our allies accountable to commitments they make," a remark that can be seen as linked to Trump's long-running call for allies to pay more for American troops stationed in those countries to help defend them.

"We cannot look the other way at allies who do not meet their obligations. This is an injustice not only to us, but to longstanding friends who honor their promises and bolster our own national security, such as Israel," Tillerson said.