NEW YORK, Jan. 11 (Yonhap) -- Former U.N. Secretary-General Ban Ki-moon left for South Korea on Wednesday after his 10-year service at the international organization, amid widespread expectations about his run for the country's president this year.

During a meeting with reporters at John F. Kennedy International Airport, Ban said he is excited about his return home but also concerned about how to use his experience at the U.N. to help advance his home country.

"My heart flutters and (I am) excited (about returning home)," Ban told reporters. "I am also concerned about how to use my 10-year experience (at the U.N.) for (South Korea's) national advancement." 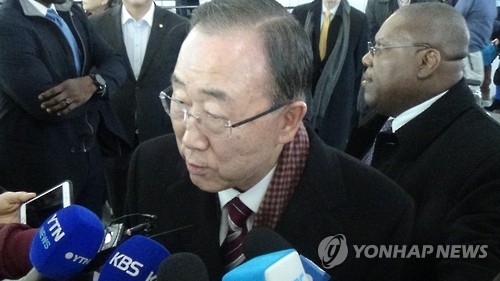 Ban, whose second five-year term as the U.N. chief ended at the end of last year, is set to arrive at Incheon International Airport, west of Seoul, at 5:30 p.m. Upon arrival, he is to deliver a brief message to the nation, which his spokesman in Seoul said will be largely about national unity and integration.

At the New York airport, Ban was accompanied by his wife Yoo Soon-taek, and several security and secretarial staff.

Ban apologized for a bribery case involving his brother and nephew, saying he was flabbergasted and ashamed that his relatives were involved in such a corruption case.

"I feel very sorry to the people for causing concerns," he said.

In various recent polls, Ban has been in second place in terms of popularity, trailing Rep. Moon Jae-in, former leader of the main opposition Democratic Party. He has recently signaled his presidential aspirations, saying, "I would give my all" if it would help advance his home country.

On Friday, Ban is to pay respects at the graves of former Presidents Rhee Syng-man, Park Chung-hee, Kim Young-sam and Kim Dae-jung in Seoul National Cemetery in southern Seoul.