Kim Yo-jong, the 29-year-old sister who serves as vice director of the Workers Party's Propaganda and Agitation Department, was included in the State Department's blacklist of North Korean officials and entities accused of human rights wrongdoing.

"She is a part of the agency in North Korea who's responsible for propaganda, for censorship, controlling information so that the people of the country do not know about the rest of the world, the system of deifying of, worshipping the family, the leadership," Assistant Secretary of State Tom Malinowski said.

"All of these are critical parts of the North Korean regime's efforts to control its population and to deny them human rights," he said in an interview with Yonhap News Agency and its subsidiary Yonhap News TV shortly after the sanctions were announced. 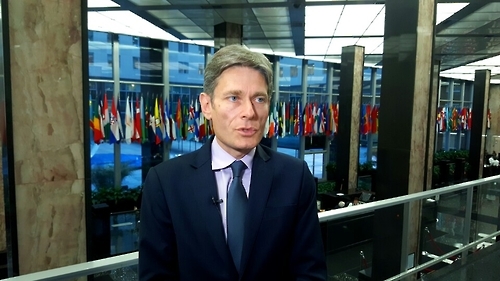 It was the second time the United States has imposed human rights sanctions on the North after blacklisting leader Kim Jong-un, 10 other top officials and five state agencies in July, which marked the first sanctions ever imposed on the North's leader.

"This list is another sign of the commitment of the United States to identify the individuals, the people, by name in the North Korean government who are responsible for the worst human rights abuses that happen in that country and to hold them accountable," Malinowski said.

The official said that the U.S. wants to send a message to North Korean officials that their "long-term futures will be different as a result of what they have done and that it is "not in their interest to get involved in things like management of labor camps or propaganda, or pursuing North Korean defectors around the world."

Malinowski said the U.S. efforts to go after North Korean human rights violators will continue in the new government not only because it's required by law to regularly update the blacklist, but it is a bipartisan issue transcending the political spectrum.

"This is an issue where Republicans and Democrats largely agree. I think both sides in our political system believe that we need to be putting more pressure on the North Korean regime and the support for our human rights strategy has also been bipartisan. I hope it will continue; I think it will continue," he said.

Addressing the problem is the key to ensuring the security of the Korean Peninsula and the U.S., he said.

"If our goal is security for the Korean Peninsula and for the United States, I don't think we are going to be truly successful in achieving that goal until the people of North Korea have the ability to choose their own future," the diplomat said.

Malinowski said the U.S. does not expect any quick results from the human rights sanctions.

"The message we're trying to send here is not really to Kim Jong-un. It's not to his sister. ... It's to everybody else in the North Korean system. It's to tell them ... 'If you personally become associated in those kinds of crimes, then some day when the Korean Peninsula is reunified and real accountability is possible, your name will already be on the list," he said.

The official also had a message to the people of the North.

"We know what you endure. We think that it is wrong. We think that you deserve to be treated like human beings with the dignity and the power to choose your future," Malinowski said. "Although it is very difficult, the United States and South Korea and the United Nations and the nations of the world are going to be on your side until your rights are finally respected."