(ATTN: RECASTS headline, lead paras; UPDATES with reports of the meeting in paras 2-8; MODIFIES 9th para to correct that Hyundai Motor Group has not made an official announcement regarding its FKI membership)

SEOUL, Jan. 12 (Yonhap) -- The Federation of Korean Industries (FKI) has apparently failed again to come up with measures that will keep it from being dissolved, as a meeting of its key members Thursday attracted no one from the top 10 business groups besides the incumbent head of the business lobby.

The meeting, held at the Seoul headquarters of the FKI, was the latest of a regular meeting for chief executives of some 20 key FKI member firms held every two months.

Thursday's meeting, however, was attended only by a handful of members, as most top executives from top local companies continued to stay away, some citing their intention to quit.

Out of the 10 largest business groups, only Huh Chang-soo, the incumbent chief of the FKI and chairman of GS Group, was present, according to informed sources.

Such a low turnout came after a series of declarations from key member firms, including Samsung and LG Group, that they will quit the FKI over a recent corruption scandal that involves President Park Geun-hye and her close friend Choi Soon-sil.

The business leaders face possible prosecution for providing a combined total of nearly 80 billion won (US$67.3 million) via the FKI to two sports organizations -- Mir and K-Sport Foundation -- that were designed and controlled by Choi.

The FKI and business executives alike have insisted their donations had been coerced by the president and her friend, but many, including prosecutors, believe the money may have been offered in exchange for business and political favors, which would make them bribes. 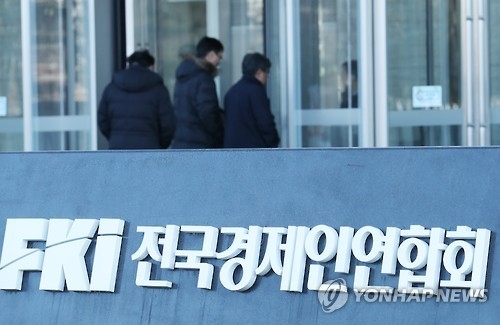 Samsung Group has already expressed its intention to quit the FKI, while many other top business groups, including LG Group and KT, have announced withdrawal of their membership as of end-2016.

"The firms must not have had any time to even consider the fate of the FKI, as they themselves face equally serious problems," a market source said earlier of the low turnout for the FKI meeting.

Thursday's meeting, though originally set to be held every two months, marked the first of its kind in four months, as the November meeting had been called off due to low turnout. It also marked the last of its kind to be hosted by outgoing FKI chief Huh.

The FKI has said its fate will be decided at its general assembly to be held next month.