SEJONG, Jan. 12 (Yonhap) -- The pace of food price inflation in South Korea ranked among the top in comparison to other member states of the Organization for Economic Cooperation and Development (OECD) as of November last year, statistics from the organization showed Thursday.

The prices of foodstuffs and non-alcohol beverages in South Korea were up 4.5 percent from a year before, the third highest after Mexico's 4.9 percent and Japan's 4.7 percent, according to the OECD's tally. South Korea was second in October and first in September.

The latest numbers do not include the price leap of eggs in December due to the avian influenza epidemic in the country, which is bound to jack up the rate further, local officials said.

The OECD's statistics cover most foods, including meat, fish, fruits, vegetables, grains, snacks, non-alcohol beverages, water and condiments. The measured items differ from country to country, but they are chosen from highly consumed products.

The food price increase had been slower in the early part of last year, starting at 1.6 percent in January and rising to the 3 percent range in the February-April period. It fell to 0.8 percent in May and dipped to minus territory in June and July before coming back up to 0.5 percent in August. The price started to jump from September after record-setting summer heat drove up the cost of vegetables. Fishery items became expensive at the same time from falling supply, in part due to failed fishing pact negotiations with Japan in June.

The decrease in cattle ranching pushed up the price of beef, which also raised the price of pork due to its higher demand as a beef alternative, officials said. 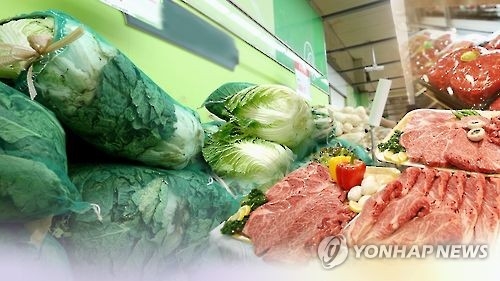