SEOUL, Jan. 12 (Yonhap) -- South Korea said Thursday it will focus on reforming the nation's financial sector this year, especially in promoting the trust business and enhancing the competitiveness of local insurers and financial holding firms,

The Financial Services Commission (FSC) will also continue efforts to reinforce the fintech industry and raise the transparency of accounting practices.

The state regulator announced a five-point "core reform policy" for 2017.

The FSC demonstrated its determination to push for the measures, saying it will shift to a "standing reform posture."

"It's part of a financial reform drive aimed at reorganizing the industry through innovation and competition," Kim Yong-beom, secretary general of the regulatory body, told reporters. 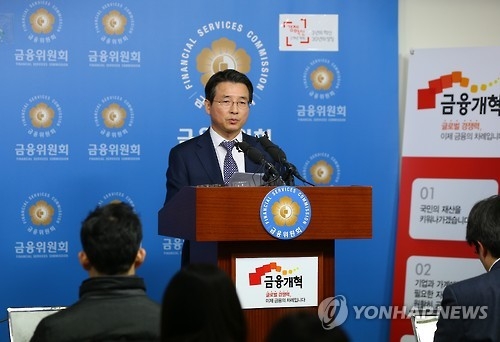 The FSC plans to draft a bill on regulating the local trust business, currently subject to the Capital Market Act, and submit it to the National Assembly in October. The envisioned legislation would allow investment trust firms to do business with more flexibility and lower the bar for new players to enter the market.

Life and non-life insurers will be given expanded autonomy in setting premium rates and encouraged to diversify products.

With regard to financial holding companies, the regulator said it will push for the improvement of "quality." The ownership system for financial groups was introduced in 2000 in South Korea. Currently, nine financial holding firms are in operation with 201 subsidiaries. Their combined assets accounted for 34.5 percent of the total in the financial industry as of June last year.

But they still face "excessive" restrictions and depend too much on flagship subsidiaries in management, the FSC official pointed out.

"(We) will push for the revision of regulations and the establishment of standard rules within this year," Kim said.

Meanwhile, the FSC plans to unveil a roadmap for the "second-phase" development of the fintech sector in the first quarter of this year and a package of measures to enhance accounting-related transparency including tougher punishment against the related crimes, he added.