"Household debt has been on the rise, but we can definitely slow down the pace," Finance Minister Yoo Il-ho said in a conference on the South Korean economy held at a hotel in New York. "The government has implemented some measures and the rising pace of household debt has been turned down."

The massive volume of household debt is one of the biggest potential risks for the major Asian economy already under pressure from lackluster domestic consumption and weak exports.

"There is limited possibility that the household credit will spread to a systemic risk," said Yoo.

Despite the country's recent political turmoil sparked by the impeachment of President Park Geun-hye, the top economic policymaker said that the government will do its best to run the economy steadily and smoothly, and take an expansionary stance to prevent any fallout from uncertainties at home and abroad.

"The impact of the political uncertainties on the financial market is limited," he said. "But external issues like a possible U.S. rate hike will weigh more heavily on the market."

Yoo is on a U.S. trip to brief foreign investors on the South Korean economic situations and ease their worries over its future. He has met with U.S. economic and financial heavyweights, including Blackstone Group CEO Stephen Schwarzman.

Schwarzman was recently named the chairman of the Strategic and Policy Forum, an advisory group on economic policies for the Trump administration. 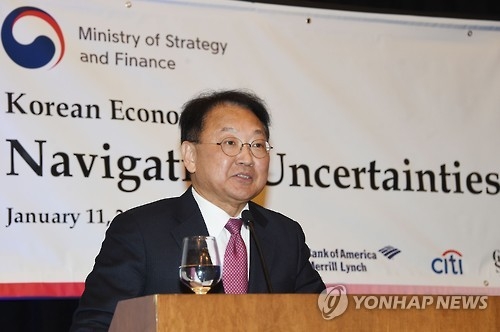