Outstanding household loans from local lenders came to 708 trillion won (US$599 billion) as of end-December, compared with 639.1 trillion won from a year earlier, according to the data from the Bank of Korea (BOK).

Compared with November, the amount rose by 3.5 trillion won.

Mortgages climbed 3.6 trillion won month-over-month to 533 trillion won in December, though the pace of growth slowed down due to increased mortgages in November, decreased home sales and higher lending rates. In November, mortgages rose 6.1 trillion won from a month earlier, the BOK said.

South Korea's overall household debt reached a record high of 1,295.8 trillion won as of end-September, according to official data.

The Financial Services Commission, South Korea's financial regulator, vowed last week to place top priority on reining in household debt this year through a "structural shift" in the borrowing practice.

The Bank of Korea is set to hold its rate-review session Friday to decide whether to maintain or cut the all-time low rate of 1.25 percent. 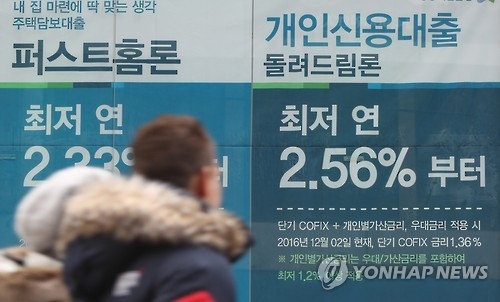 Household loans up 10.8 percent in December

Household loans up 10.8 percent in December