"With the impending release of Park's new drama 'Man to Man,' Park will embark on an Asian tour to meet his fans," Mountain Movement said in a press release.

According to the event's publicist JS Partners, "The enigmatic male protagonist from the hit TV series 'Cheese in the Trap' is riding a huge wave of popularity not only in China, but also in Southeast Asia."

Park rose to stardom in the wider China region after the SBS TV series "My Love from the Star" became a huge sensation in 2014. His popularity continued to skyrocket after playing the stoic college senior Yoo Jung on "Cheese in the Trap," which became an instant hit both at home and in Chinese-speaking countries.

Last year, Park met with his fans in Beijing, Taiwan and Thailand. The events were financed entirely by the 33-year-old actor. At the meet-and-greets he engaged with his fans by asking them questions, making a phone call to an attendee and taking group selfies. 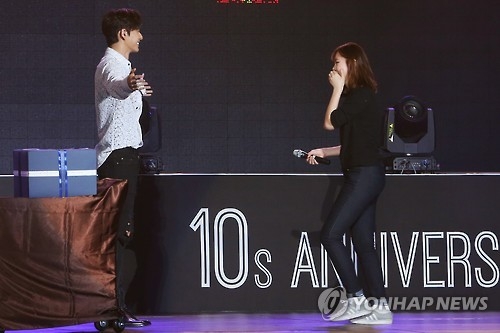