SEOUL, Jan. 12 (Yonhap) -- The cost of private education for children is heavily eroding what little is left of spendable family income, a challenge to government effort to revive the economy through consumption, statistics indicated Thursday.

Official numbers from Statistics Korea said a city-dwelling family of two people or more on average spent 226,576 won (US$189.38) a month on out-of-school education for children in the third quarter last year. This is a 6 percent increase compared to a much less 1 percent increase in disposable income. It is also higher than the 1 percent average consumer price rise for the year.

The portion of income going to teaching children rose from 5.4 percent to 5.7 percent.

The given numbers, however, are beguiling, according to families who talked to Yonhap, some saying they spend as much as 10 percent of their income on education and sometimes taking out loans to make ends meet.

Details of the statistics show that surveyed households sacrificed on expenditures other than education. Budget for food and drinks fell 4 percent, that for health services 8 percent, communication device bills 3 percent, and culture and entertainment 1 percent. 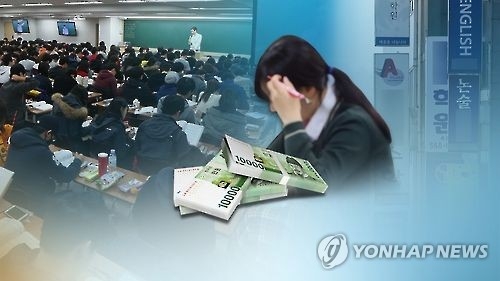 The amount going into private education increased with income, the same statistics showed. While families earning between 1 million to 2 million won a month spent approximately 45,000 won, those making over 4 million won spent 618,000 won, a 14-fold difference. In the upper income group, the proportion of education spending reached 10 percent.

Economic policies in part had concentrated on giving people more pocket money so that they would spend and increase demand. Statistics, however, indicate that households are actually eating and drinking less and doing away with extras.

"We spent 3.3 million to 3.4 million this month on a high school senior," a 46-old-mother living in a posh southern Seoul neighborhood told Yonhap. "Including the private academy cost for the other child, we are spending about 4 million to 5 million won a month. Nearly all of the income is being poured into private education."

A 50-year-old father, who makes slightly over 5 million won a month, said he spent the entire sum for his two high school children. He said he takes out a 1 million won loan from banks each month for family expenses.

"I would feel insecure not sending my kids to private academies when other children are all going," he said. "That's why we keep up even when we have to take out loans."

Prof. Kim Kwang-seok of Hanyang University in Seoul noted that education usually accounts for the third highest household spending after food and housing.

"Even low-income families are ambitious about teaching their children. The felt inflation will be stronger when the cost of private education becomes more expensive, but families cannot give it up," he said.
(END)