Pundits bet Ban will choose to ally with an existing political party rather than creating his own to prepare for an early presidential election.

Hit by a recent scandal involving President Park Geun-hye, the ruling Saenuri Party and a soon-to-be-launched splinter party are struggling to find a potent figure to lead them through the election. They are currently pinning hopes on Ban, seen as a conservative, who is closely competing with Moon Jae-in of the opposition Democratic Party for the frontrunner position in opinion polls.

Ban, a former foreign minister, completed his second five-year term as the U.N. helmsman at the end of last year and is scheduled to land in Seoul on Thursday afternoon.

The conservative parties are currently refraining from making explicit love calls, with their welcome messages underscoring the need for stringent vetting for his qualifications.

"Ban should remember he is Koreans' pride and a national asset. In this grave situation of the country, we hope Ban will show leadership with a distinctive prestige and dignity," Rep. Chung Woo-taik, the floor leader of Saenuri, said.

A conservative splinter party, named Barun (righteous) Party, claimed Ban should come up with a clear vision for the country. The party founded by former Saenuri lawmakers will set sail later this month.

The group also called on Ban to clarify recent rumors, including a bribery allegation. Last week, Ban filed a complaint against a local magazine with a press-arbitration body over its report that he received bribes worth US$230,000 in 2005 and 2007 from a businessman convicted of corruption.

Rep. Yoo Seong-min of Barun, who is also cited as a potential candidate, said Ban should clearly show whether he is a conservative or liberal.

"I do not know about his identity well," Yoo said during an interview with YTN on Thursday.

Nevertheless, the conservative parties are engaging in a behind-the-scenes competition to attract Ban, party insiders said.

"As there is not much time, (Ban) would not be able to make a new party. We expect Ban to join the Barun Party, which will also induce Chungcheong-based Saenuri lawmakers to join us," a Barun lawmaker said. North Chungcheong Province is Ban's hometown. 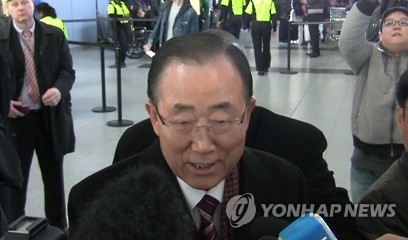