SEOUL, Jan. 12 (Yonhap) -- A presidential official said Thursday he met President Park Geun-hye's friend at the center of a political scandal "dozens of times" before and after she took office in 2013.

Lee Young-sun, a presidential security service official, made the remark during the fourth hearing of Park's impeachment trial at the Constitutional Court. He denied, however, that he ever drove the friend, Choi Soon-sil, in his car or brought her to the presidential office.

Choi is accused of abusing her ties to the president to extort money from conglomerates, meddle in state affairs and win personal favors. Park was impeached by the parliament on Dec. 9 on suspicion of colluding with Choi and neglecting her duty during a deadly ferry sinking in 2014.

"I don't remember exactly, but I think (I met her) dozens of times," Lee said, responding to a question about how frequently he met Choi between the end of 2012 and the beginning of 2016.

A former judoka, Lee worked as Park's bodyguard during her presidential campaign in 2012 and has worked at the presidential office since her inauguration the following year. Suspicions were raised that he actually served as Choi's personal assistant after he was seen wiping her mobile phone with his shirt in footage from late 2014.

Lee refused to answer most questions by the members of the parliamentary impeachment panel, who served as prosecution at the trial. But he admitted to exchanging text messages with Choi and interacting with her when collecting Park's clothes from a dressmaker's shop. He said he was aware that Park and Choi were "acquainted."

Reversing an earlier statement he made during questioning by prosecutors, he also said he delivered money from the president to the dressmaker to pay for her clothes.

Expressing frustration at Lee's refusal to testify, Justice Kang Il-won, the chief justice for the case, reminded him of his obligation to speak unless the question involves issues related to national security or national secrets.

Kang pointed out that questions regarding the number of times Choi visited the presidential office have nothing to do with national security. Still, Lee refused to reply, citing his obligation to confidentiality.

Lee also responded to questions about Park's whereabouts during the ferry disaster that left more than 300 people dead or missing. Critics have long argued that she did not respond properly in the early hours of the sinking. Park insists she received briefings and gave orders by phone from her office at her residence.

Lee said he has no memory of seeing Park on that day even though he went to her residence because he judged that "there may be something I may need to do" upon seeing news reports about the sinking.

In his testimony before the court, Ryu Hee-in, who worked at the National Security Council during the Roh Moo-hyun administration, disputed earlier claims by Park's then national security adviser that he didn't know the exact whereabouts of the president when the news broke.

The presidential office operates in a way that ensures an official in that position can always reach the president, he claimed.

The court also summoned a journalist and a former head of the vernacular Segye Times to question them over allegations Park suppressed press freedom, a factor cited for her impeachment. The paper allegedly came under government pressure after it reported on allegations of influence-peddling by Jeong Yun-hoe, Choi's ex-husband and Park's former aide, in 2014. 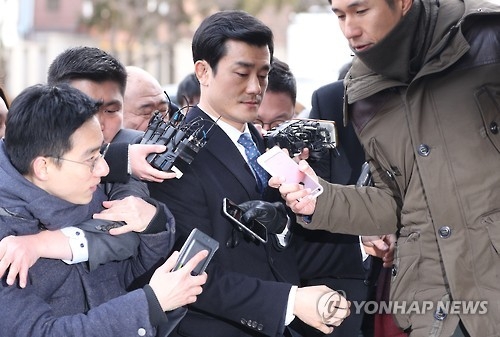