During the event on Wednesday, the group introduced its sixth EP "Mystery of Venus," a four-track album which shows off a new side of Hellovenus, which has an air of mystery.

The occasion also featured a short presentation of choreography highlights for the lead song "Mysterious." The retro swing/dance pop song features a new concept where the members transform into mysterious yet curious secret agents. 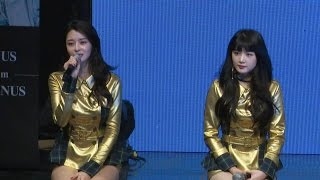