INCHEON, Jan. 12 (Yonhap) – The reigning Asian club football champions Jeonbuk Hyundai Motors started their preparation for the upcoming season on Friday amid concerns that they might not get a chance to defend the title this year due to a bribery scandal.

Jeonbuk, the 2016 Asian Football Confederation (AFC) Champions League winners, departed for Dubai, the United Arab Emirates (UAE), to begin their offseason training. The players will practice in the Middle East for 23 days and will have four friendly matches there, according to the club.

Jeonbuk completed their 2016 season on Dec. 15 because they also had to compete at the FIFA Club World Cup in Japan as the Asian title holders. Most South Korean clubs wrapped up their season in November following the end of their K League Classic campaign.

Jeonbuk players only had about four weeks of vacation before entering preparations for the new season, but they said Friday they are eager to achieve a league-AFC double in 2017.

Jeonbuk last year claimed their first continental title since 2006 by beating Al Ain of the UAE. However, they finished second in the domestic league behind FC Seoul and were denied a three-peat.

"Since we closely missed the K League title last year, we really want to win it this year," forward Kim Shin-wook said at Incheon International Airport. "It's also important that we maintain the Asian champion status along with the K League title."

Jeonbuk, however, are in danger of missing out on the top Asian club competition, although they've already qualified for the group stage. The AFC recently told the K League office that the club's eligibility will be reviewed by an independent judicial body called the Entry Control Body (ECB).

Jeonbuk last year saw one of their scouts was convicted for bribing referees in 2013. They were docked nine points by the K League's disciplinary committee and were fined 100 million won (US$84,800).

An AFC rule states that any club found guilty of match manipulation will be banned from the AFC Champions League (ACL) for one year. Jeonbuk will have to submit an explanatory document on the bribery scandal by next Tuesday and wait for the ECB's decision.

The players said they will just focus on training and get ready for the new season. At the 2017 ACL, Jeonbuk have been placed in Group H with Adelaide United of Australia, Jiangsu FC of China and a playoff-winning team to be determined later.

"It's something that we cannot do anything about," said midfielder Lee Jae-sung. "If we can't compete, I would probably feel empty and disappointed."

Jeonbuk's new left back Kim Jin-su, who joined the club on a four-year deal from German Bundesliga side TSG 1899 Hoffenheim, said he was hopeful of playing at the ACL.

"I've never heard about us not going to play at the ACL," he said. "I believe we will be able to compete." 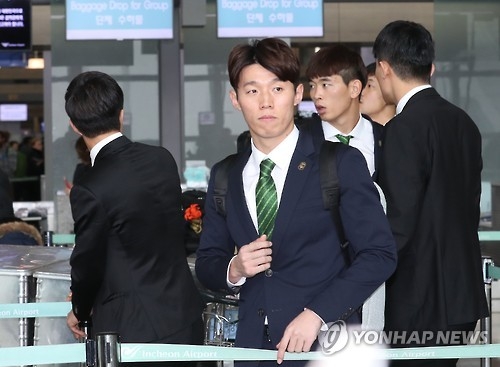