SEOUL, Jan. 12 (Yonhap) -- An appeals court on Thursday confirmed a 30-year jail term for a man accused of stabbing to death a 22-year-old woman near one of the country's busiest subway stations in Seoul that sparked nationwide shock and protests.

The Seoul High Court upheld a lower court's decision and convicted the man, surnamed Kim, of stabbing the victim, whose identity was withheld, multiple times in a bathroom in a building near Gangnam Station in May last year. The victim was a complete stranger to Kim.

According to prosecutors, the 34-year-old waited for about 50 minutes for a woman to show up in the bathroom. When the victim came into the unisex restroom, Kim attacked her with a knife.

The court said it took into consideration the seriousness of the crime, the fact that it was done against a stranger and the social anxiety caused by the incident.

While acknowledging that Kim was suffering from schizophrenia, the court did not accept the defendant's claim that he was feeble-minded when he committed the crime.

The case has triggered nationwide debate over crimes against women in the country. Thousands of South Korean women took to the streets after the incident, paying their respects to the victim, and voiced the need to intensify punishment for crimes targeting vulnerable members of society. 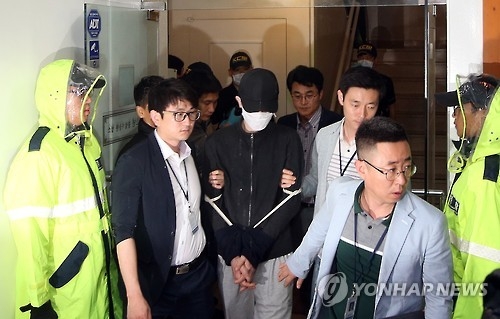