Kim is a native of Jeonju, North Jeolla Province, the hometown of Jeonbuk. He made his pro debut with Japanese outfit Albirex Niigata in 2012 before moving to German Bundesliga club Hoffenheim two years later.

Kim made 34 league appearances for Hoffenheim the last two seasons but hasn't played a single match for the club in the 2016-17 season.

Kim has 22 caps for South Korea and won the gold medal at the 2014 Asian Games.

"I'm happy to join the top Asian club," Kim said through Jeonbuk. "I always thought my first K League club would be Jeonbuk."

Jeonbuk said Kim will boost their defense and allow them to play more aggressive football in the upcoming season.

"He is a player with a bright future," Jeonbuk head coach Choi Kang-hee said. "As we now have aggressive full backs on both flanks, we'll be able to show various styles of attacking football." 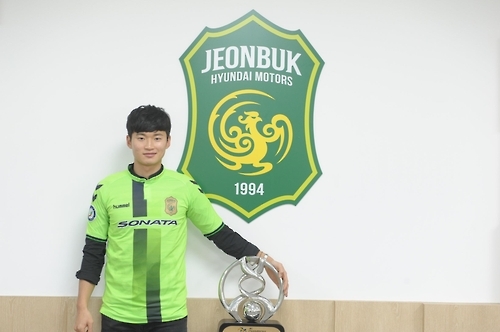