Ban was set to return to his home country in the afternoon after completing his second five-year term as U.N. secretary-general amid high expectations that he would run for the nation's top office this year.

Ahn, South Chungcheong governor affiliated with the main opposiiton Democratic Party, is a potential competitor to Ban over regional votes in the central provinces of Chungcheong, which have historically held a casting vote in presidential elections. Ban hails from the region.

Referring to conservative parties' courting of Ban as a potential presidential candidate, Ahn told Yonhap News Agency, "It will degrade South Korea's dignity to that of developing countries."

Citing the U.N. charter, Ahn said U.N. secretary-generals are not allowed to hold a government position in their home country after they stand down from the post, which represents all the member nations.

"It is embarrassing and out of the norm," Ahn said, claiming Ban is "a leader that even does not follow common sense." 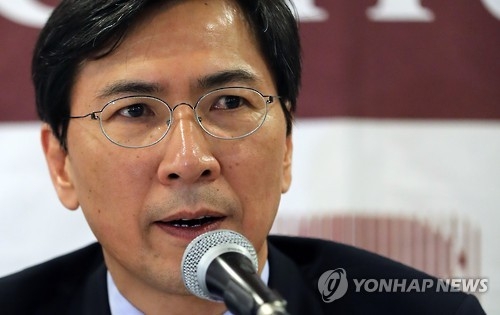 "The two Koreas should first start dialogue on the North Korean nuclear issue. It will never help South Korea to dismantle the North through sanctions without any efforts and strategies to bring it to the international community," Ahn said.

"A South Korean leader should focus on preventing national division on the diplomatic issues, especially on national security," Ahn said, claiming Seoul should not waiver in its position under pressures from Washington and Beijing.

China has been escalating its retaliatory actions on South Korean businesses and K-pop artists in protest of the planned deployment, which it fears would damage its strategic interests in Northeast Asia.