ULSAN, Jan. 12 (Yonhap) -- Seven out of 10 aquatic mammals accidentally caught in nets or poached in South Korea are finless porpoises, designated as a maritime mammal to be conserved by the government last year, with the number of such victims reaching some 1,300 on average annually, the coast guard here said Thursday.

According to the Ulsan Maritime Security Police, a total of 9,710 whales were trapped in nets or illegally captured inside the South Korean waters between 2011-15. 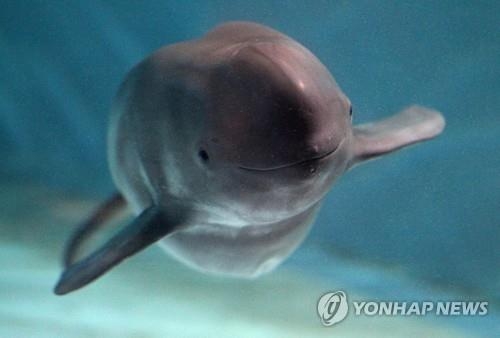 The population of the 2-meter-long, light gray porpoises living in the West Sea sharply dropped from about 36,000 in 2004 to some 13,000 in 2011 due to incidental catches or poaching, according to another report from the National Institute of Fisheries Science last year. The South and West Seas are the country's biggest habitat for the endangered mammals.

The rapid decline is attributable mainly to stow nets that are used a lot in strong currents. The nets make porpoises almost unable to escape from them during their maximum underwater diving time of four minutes before breathing on the surface.

"We're currently compiling the 2016 figure of such victims, and expect it to reach some 1,260," a maritime official said.
(END)