Japanese military planes entered the zone near Ieodo, an underwater rock formation located some 160 kilometers south of Jeju, 444 times in 2016. There was no move by Japanese planes to approach Dokdo in the East Sea, a defense ministry official said.

The intrusions into the zone by the Japanese military appear to be part of Japan's stepped-up efforts to respond to frequent flights by the Chinese military over the sensitive maritime region, he said. Air defense zones of the three neighbors overlap in the area.

Previously, Chinese planes crossed into the KADIZ 59 times in 2016 and 62 times in 2015, according to the ministry.

The Chinese authorities said its planes were conducting military drills there but Seoul's defense ministry didn't rule out the possibility that the flights were part of China's efforts to show its opposition toward the planned deployment of an advanced U.S. missile defense system to South Korea this year.

Since Seoul and Washington agreed to install a Terminal High Altitude Area Defense (THAAD) battery here to defend against growing missile threats from North Korea, China expressed strong opposition to the plan, claiming that the system could be used against it. Beijing in particular has raised objection to the THAAD's powerful X-band radar which it claims compromises its security interests.

In 2013, South Korea expanded its own KADIZ to cover Ieodo after China included it in its own air defense identification zone, which is designed to give a country more time to check unauthorized planes that may pose security problems. 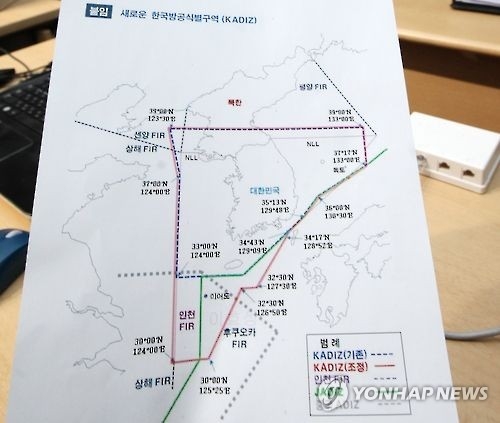