SEOUL, Jan. 12 (Yonhap) -- Kim Jung-gi doesn't follow an expected order when he draws. Sometimes he starts from the neck, or even a little toe, to flesh out a person. In his large-scale drawings, however, all the subjects, drawn without a sketch, are perfectly balanced and positioned to make a complete narrative.

A live drawing show, which is what the 42-year-old artist has widely known for in and out of the country, would leave viewers in total awe or disbelief. Images flow out of his hand, and it's as if he is just tracing invisible underdrawings. 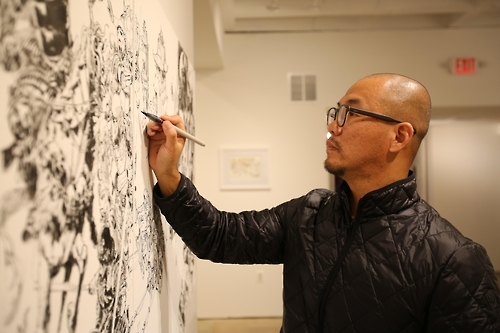 In an interview with Yonhap News Agency on Thursday, the artist, shrugging at the suggestion of innate, if not supernatural, ability raised by many, said years of practices and different perspectives to observe things might be the reasons behind his mind boggling skills.

He feels no need to sketch in advance because 60-70 percent of the images that he plans to draw are already in his head, he said.

"I've drawn a lot since as far back as I can remember. I am just bringing out all the visual images that I have stacked inside my head," Kim said, sitting at his desk at the art academy he co-runs in Seoul's Hongdae neighborhood.

What set him apart from others, he said, was that he tried to draw exactly what he saw. For example, a preschooler Kim already drew three-dimensional while others struggled with a two-dimensional drawing. At 9, he set his sights on becoming a cartoonist.

"I drew anything that was around me and interested me. I drew a dog when my mom didn't buy me one. I painted a pair of sneakers that I wanted to get. Teachers were surprised to see how detailed my drawings were," he said.

In 2011, when he participated in the Bucheon International Comics Festival (BICOF), it was suggested that he stage a live drawing performance to attract more attention from the visitors. Thinking it wouldn't hurt to give it a try, he drew on a big piece of paper for a few days and uploaded the sped-up video of the show on YouTube.

The reaction was much more fervent and quicker than expected.

The next year, he was invited to Strabulles, an animation festival in Strasbourg, eastern France, which became a trigger for a flurry of invitations for global events. He was invited for the Angouleme International Comics Festival, one of the biggest comics festivals in Europe. Kim's been going around the globe for solo exhibitions, lectures, drawing shows and book signing events, spending more time on overseas projects than for those in Korea.

Starting out as a graphic novelist, he has kept pushing his boundaries. He writes a graphic novel, paints, appears in TV commercials and social campaigns and is engaged in contemporary art. In 2013 and 2014, his two drawings, along with the live drawing videos, were auctioned off at Christie's.

Since his works have gone viral on YouTube, he's got more opportunities to collaborate with global artists and writers.

He's since illustrated for the Korean edition of "The Paradise" and "Third Humanity" by Bernard Werber, a globally recognized French science fiction writer. Together with writer Jean-David Morvan, he published the graphic novel "McCurry, NY 11 September 2011." It is a story about the life of photojournalist Steve McCurry, best known for his striking cover photo for National Geographic, depicting an Afghan girl with piercing sapphire green eyes. Plus, the artist ran a joint exhibition with Japanese contemporary artist Takashi Murakami, who is credited for blurring the lines between high and low arts.

"I don't put a limitation on what I do. I do it as long as it is fun. Honestly, I don't care if people love my work. When it comes to artwork, the most important thing is how I feel about my work," he said. "I don't have a big goal. I just hope that I continue having fun while I draw," Kim said.