SEOUL, Jan. 12 (Yonhap) -- Former U.N. Secretary-General Ban Ki-moon faces a string of daunting challenges, including rigorous ethics vetting and escalating attacks from his political rivals, as he is girding for a presidential race later this year, observers said Thursday.

Upon arrival home, Ban was bombarded with a slew of questions about bribery allegations surrounding himself and his relatives, and his leadership chops, vision and future political affiliation -- a sobering reminder of grueling tasks ahead for the political neophyte.

Ban, whose second five-year term as the U.N. helmsman ended at the end of last year, has yet to officially declare his presidential bid. But he has already been thrust into rough political waters as he has signaled his strong ambitions for the country's top elected office.

For the time being, Ban is expected to reach out to citizens across the country under his mantra of national harmony and unity rather than immediately engage in political activities as he seeks to gauge public sentiment, observers said.

"Ban may try to have some time to test the political waters and determine public sentiment rather than joining a particular political party right away," Jun Kye-wan, a political analyst, told Yonhap News Agency.

"He may most likely seek to join a centrist political entity through which he could maximize his political advantage," he added.

Despite being away from his home country for a decade, Ban has remained a figure to be reckoned with in South Korea's political scene, as voters have grown disenchanted with establishment politics plagued by factionalism, partisanship and ideological division.

In various recent opinion polls, the former foreign minister has ranked second in terms of popularity, closely trailing Rep. Moon Jae-in, a former leader of the main opposition Democratic Party and the party's standard-bearer in the 2012 presidential election. 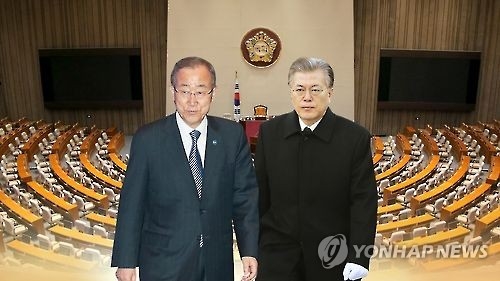 Mindful of the political ramifications of Ban's arrival, his rivals in opposition parties have accelerated their moves to keep him in check, calling for "strict" vetting. They said Ban must clearly address the corruption accusations against him and his relatives.

"Ban said he was excited (about his return home), but our citizens here are apprehensive about corruption suspicions about former U.N. chief Ban himself and his family," Koh Young-jin, the spokesman for the Democratic Party, told reporters.

"Ban himself must clarify whether he is qualified to discuss the future of the country (as a presidential contender)," he added.

Another bribery case involving his brother and nephew has emerged as another dispiriting setback for Ban. Ban has said he was "flabbergasted" about the case, and that he has not aware of it.

When it comes to the screening process, however, Ban has voiced confidence, saying he already went through a tough parliamentary confirmation hearing in 2004 to become the country's top diplomat.

Another major task for Ban is to decide which political force he will ally with.

Before a corruption scandal centered on President Park Geun-hye and her longtime confidante hit the country last year, Ban was courted by Park's ruling Saenuri Party which has suffered a dearth of powerful contenders to field in the key election this year.

Political observers, however, now dismiss the possibility of Ban running in the election on the ruling party's ticket given that the party has lost public confidence in the wake of the scandal that led to the impeachment of the president.

Ban has himself been seen as distancing himself from the unpopular president, although he had previously espoused some of Park's major policy initiatives and maintained close relations with her.

The minor opposition People's Party is most active in courting Ban as it is moving to forge what commentators call a "third political zone" -- a group of like-minded politicians who are not anchored in the political mainstream, but can help placate growing anti-establishment sentiment.

The party's efforts to build a tie-up with Ban, however, have faltered as Rep. Ahn Cheol-soo, its former co-chairman and potential presidential candidate, opposed the move, calling it a "crude political manipulation." 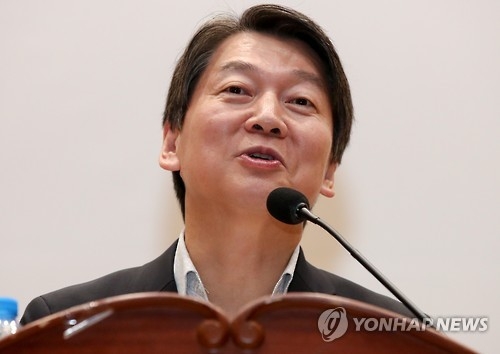 Pundits largely rule out the possibility of Ban seeking to create a new party, as the process will take much time at a time when the election could be held earlier than the originally scheduled month of December due to the presidential impeachment.

Some pundits raise the prospects of politicians coalescing behind Ban based on the highly polarizing issue of constitutional revision.

Late last year, Ban raised the need to rewrite part of the Constitution last amended in 1987, saying "the basic law does not fit the country's grown body."

Apart from political affiliation, Ban also faces the Herculean task of crafting a policy vision that can win the hearts of citizens yearning for fresh change.

"Ban has said he would give his all for the advancement of the country, but he should send a clearer message to the citizens about what kind of clear-cut policy vision or philosophy he has for statecraft," said Kim Hyung-joon, a politics professor at Myongji University.

A glimpse into Ban's economic policy has been offered by Korea University professor Kwak Seung-jun, who serves as Ban's key economic advisor.

Despite Ban's lack of political experience, Ban's 10-year experience in running the international organization with more than 190 member states can be regarded as a crucial asset in his potential presidential campaign, observers said.

"The essence of politics is to coordinate and address conflicts," Kim of Myongji University said. "Over the past decade, Ban has met with the countless number of foreign heads of state and delved into a series of crucial world issues. That could be his great asset."