The decision came as the independent counsel investigating the case requested the committee to file the complaint, as it has found "evidence" showing Lee delivered false testimony during a parliamentary hearing held last month.

Lee appeared before the National Assembly in December to participate in a hearing on local conglomerates' connection to the scandal which led to the impeachment of Park.

Under South Korean law, those delivering false testimony at a parliamentary hearing may face up to 10 years of jail time. 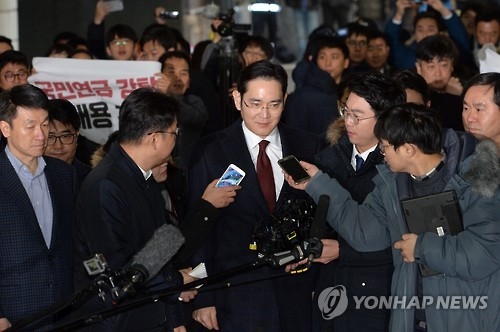 Samsung has been facing allegations that the company reached a contract worth 22 billion won (US$18.3 million) with a Germany-based company controlled by Park's confidante Choi Soon-sil. The conglomerate also provided 20.4 billion won to two public cultural and sports support foundations with possible links to Choi.

Investigations showed Samsung may have provided the funds in return for winning a support from the state-run National Pension Service, a major shareholder for Samsung affiliates, in a high profile merger deal reached in 2015.

The independent counsel claimed the transactions can be considered a bribe made at Park's request, and Lee delivered a false statement on Dec. 6 by claiming he never received such an offer from the president.