SEOUL, Jan. 12 (Yonhap) -- To the layman, human nature is a tricky subject to grapple with. But at times it becomes pronounced, in its best and worst forms, under extreme circumstances.

"It's a massive work. Many storylines are melted in. It's a drama about people who don't give up," director Choi Byung-gil said at a press conference in Seoul. 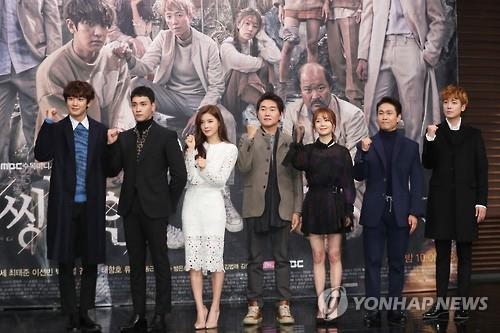 Spoiler: Just one character returns home alive, which is where the show begins. The plot slowly tracks back events following a mysterious plane crash that occurred four months prior.

The story revolves around nine people, including a washed-out musician, former bandmates, a resourceful stylist, a rising actress and CEO and other employees of the fictional Legend Entertainment agency. They become stranded on a deserted island after their private jet crashes in the ocean.

The only rule is survival, but the castaways later discover that the plane crash wasn't a mere accident and try to get to the bottom of it.

"Missing Nine" is carried by an ensemble cast.

Lead actor Choung Kyung-ho stars as Seo Joon-ho, a 28-year old singer and guitarist of the band "Dreamers." A former music prodigy and once a top star, he's fallen from grace over a controversial scandal and barely manages to make ends meet by small TV appearances yet maintains a big ego.

His opposite Baek Jin-hee plays the resourceful Ra Bong-hee, Seo's stylist. She's the sole survivor who returns home and holds the key to the show's mystery. From a family of poor means, Ra come to Seoul to make it big, but gets handed misfortune on her first day of work. 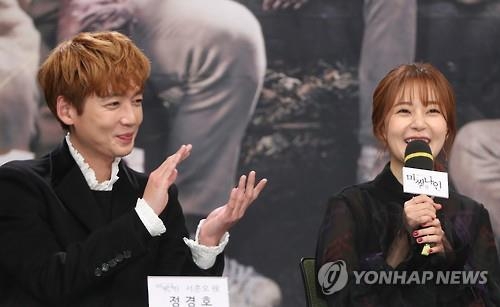 The cast also includes Jung Ki-joon who plays Seo's manager, Choi Tae-joon as a bass musician, and Lee Sun-bin who plays a fast-rising actress on the threshold of mega stardom.

When asked whether the show was in any way inspired by the Sewol ferry tragedy in 2014, Choi, who previously worked on "Angry Mom," said the show isn't related to real life events.

Choi, though, said "in times of disaster, there are those who want to get to the bottom of the cause and those who try to conceal it," adding that the show will be an exploration on common human nature.

Due to its premise, comparisons to the hit U.S. TV show "Lost" is inevitable. But Choi promised "Missing Nine" will be a different show.

"Lost is a story about people reacting to the mystery surrounding an island. (In Missing Nine,) the island is a mere tool that isolates the characters from the world."

"(The island) provides an opportunity (for the characters) to reflect upon their past lives. I think it will be a totally different drama from Lost," Choi said.