SEOUL, Jan. 12 (Yonhap) -- A teaser video featuring highlights of the upcoming television drama "The Voice" has been unveiled.

The five minute clip was screened for the first time at a promotional press conference for the new OCN cable TV series held in Seoul on Wednesday.

Featuring stars Jang Hyuk, Lee Ha-na, Baek Sung-hyun and Super Junior's Yesung, the upcoming crime action drama talks about police officers at a 112 emergency call center who learn the true meaning of their jobs as they hunt down a serial killer behind the gruesome murders of their family members.

Jang plays a former star detective who gets demoted for using excessive force and transfered to a remote location where he works as a first responder. Lee takes on the role of a police officer gifted with hearing even the slightest change in sound. She uses her abilities to listen for clues in solving cases.

The weekend drama will premiere on Saturday at 10 p.m. 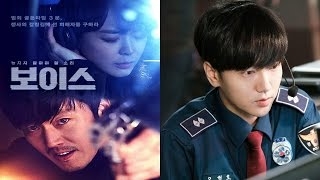