The video shows the group's dance cover performance of f(x)'s "Rum Pum Pum Pum," released in 2013, off its second LP "Pink Tape." The vocals, which flow in the background, are also superseded by Pristin's own voices, showcasing not only the members' dancing abilities but also vocals.

The clip marks a follow-up to two previously released clips covering "Adore U" by Seventeen and Girls' Generation's "Catch Me If You Can." Rather than putting all their eggs in one basket and into a groundbreaking debut rollout, Pristin preferred to set a pre-debut project, offering itself ample opportunity to observe viewers' responses as well have a great build-up to capture attention.

Covering various numbers before a debut often attests to the artist's wide range of musical potential and it helps gain a bigger fan base by presenting stylistic shifts that cater to consumers of different tastes. It is becoming more and more common in the popular music marketplace today.

In that respect, Pristin seems to have pulled it off. Impactful enough to make a stir online, this serial cover project spawned a number of zealous fans who claim to be dying to see the band's original effort. The only shortcoming of "Rum Pum Pum Pum" cover is Siyeon's absence due to a leg injury.

Pristin held a concert called "Pledis Girlz Concert Bye & Hi" on Friday. The moniker Pristin was made official and the group announce its imminent debut. 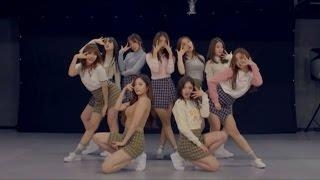