SEOUL, Jan. 12 (Yonhap) -- Australia's new ambassador to South Korea said Thursday that one of his priorities is to increase cooperation in trade and investment between the two countries, especially in the service sector.

Ambassador James Choi, who took office late last year, also expressed hope to raise the level of "strategic partnership," advising Seoul to go beyond its diplomacy concentrated on major powers and broaden its partnerships with other countries in the region.

"The free trade agreement that went into effect two years ago is a high priority. That is further expanding our trade opportunities, our investment, (the) two-way investment relationship," Choi said in an interview with Yonhap News Agency. "It's also the service area which we are focused on."

Choi cited the financial sector as the most promising area where both can work together, adding accounting, legal services and IT as sectors having much room for increased cooperation with South Korea. 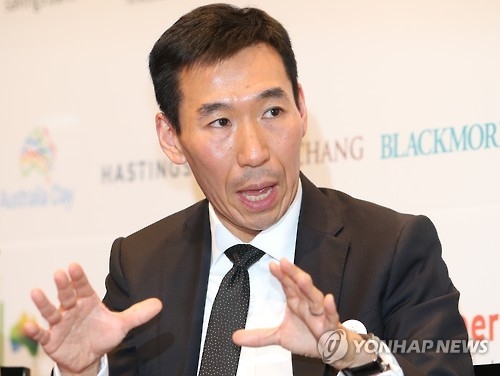 He also said one of his major goals is upgrading diplomatic ties between the countries that have many things in common.

"What I am going to do in terms of strategic partnership is to remind Korea that it does have friends if you look beyond that focusing on major powers, that there are countries in the region that share common values, common interests, same democracy and same system," he said.

Choi was born in South Korea and emigrated to Australia with his family when he was four. He majored in economics and law and joined the foreign ministry in 1994.

The two countries established diplomatic ties in 1961. This is the first time that Australia has sent a top envoy of Korean descent to Seoul.

Choi will also serve as its ambassador to North Korea.

Asked when he will visit the North, he hoped to go there "as soon as possible," saying that his goal for the trip would be to raise Australia's concerns over the North's nuclear weapons program.

"My goal would be to register, continue to register Australia's strong concerns about North Korea's nuclear and missile programs. Australia has been fully supportive of UNSC resolutions and international sanctions against North Korea," he said.

The ambassador said that the world should be ready to work with the North if it is willing to give up its nuclear programs and return to talks and follow international laws. But he noted that he has not seen North Korea showing that willingness yet.