WASHINGTON, Jan. 12 (Yonhap) -- The nominee for CIA director Mike Pompeo on Thursday pointed to North Korea as one of the biggest threats to the United States, along with terrorism, China and Russia.

Pompeo made the remark during his Senate confirmation hearing in response to a question about whether he believes terrorism is the highest threat that the U.S. faces.

"In the near-term threat to life and limb of Americans, yes. I put North Korea, China and Russia right up there alongside them (terrorists)," he said.

Asked which one of them has the weapons to do the U.S. harm, Pompeo said, "The nuclear powers are the ones that have the biggest threat to do catastrophic harm to the United States."

Pompeo also said the North has "dangerously accelerated its nuclear and ballistic missile capabilities, with little regard for international pressure." 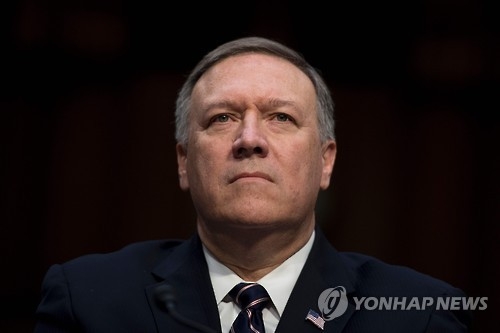 Earlier in the day, Pompeo also expressed concern about the North's cyber capabilities, saying that commercial technologies have spread into the "hands of those who wish us harm."

"We have long seen this dynamic with the proliferation of chemical and biological weapons and ballistic missile technology, but increasingly in the cyber domain, countries thought to be unsophisticated, such as North Korea, have overcome what appear to be low technological barriers of entry to engage in offensive cyber operations," he said.

"The U.S. must continue to invest wisely to maintain a decisive advantage," he said.